The last King of the Pomarè dynasty 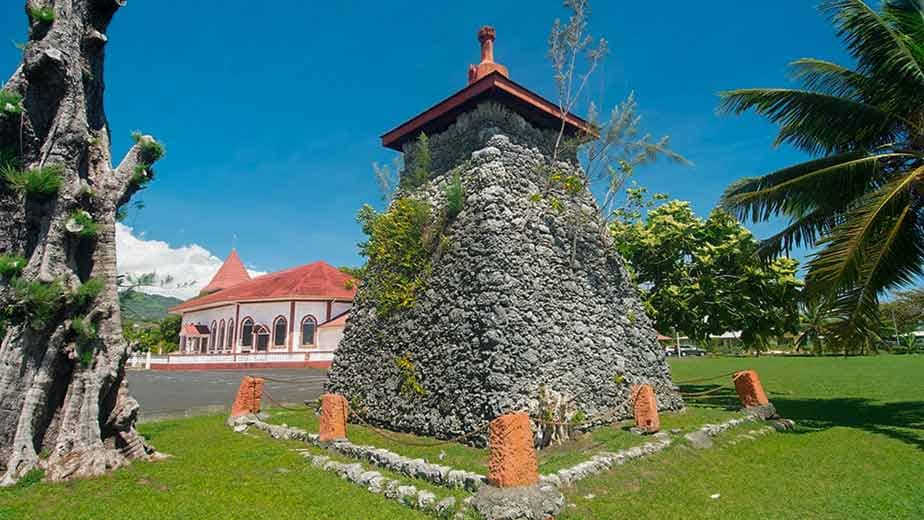 Take in a bit of Tahitian history at the Tomb of King Pomare V, the island’s last monarch’s final resting place. Pomare V (1839-1891) had the monument built for his mother, Queen Pomare IV, but near the end of his life, he had her remains exhumed and had his own burial there.

Until the late 18th century, Tahiti was ruled by different chiefs and kings in different regions. It was not until 1788 that one of the chiefs (with the help of former European Bounty crew members, by the way) succeeded in taking over the rule of the entire island.

The 45-year-old Tunuieaite atua i Tarahoi, called Tu, became Pomaré I in 1788 and founded the Pomaré dynasty. Just three years later, in 1791, he was succeeded on the throne by his son – Pomare II.

The Pomaré dynasty ruled Tahiti until finally in 1880 the entire archipelago was annexed by France and became part of French Polynesia. The last ruler of the dynasty and also the last king of Tahiti was the hapless King Pomaré V, whose tomb can still be visited near Papeete.

Originally, the tomb was built of coral stone in 1879 for Pomares V’s mother, who ruled Tahiti as a popular regent for more than 50 years. Queen Pomaré IV, however, was granted only 12 years in her tomb before her son moved her and claimed the tomb for himself.

The lighthouse-like structure is a popular photo subject, not only because of the fiery red door and the Pomare insignia but also because of the Greek urn on the tomb.

Thus, locals and guides keep claiming that the tomb top does not show an urn at all, but a liquor bottle. For the last king of Tahiti did not come to a holy end.

In 1880, he voluntarily abdicated for a lavish pension from France, leaving his land to the French. By this time, Pomare V was already a severe alcoholic.

After his abdication, the former regent took even further refuge in alcohol. Only 11 years later, at the age of 52, Pomare dies lonely and is buried in the great crypt with his “liquor bottle” on his head.

The tomb of the last king of Tahiti is now a popular destination. Visitors will find it just a few kilometers outside the capital Papeete, on a headland near Arue at Point Kilometre 4.7.