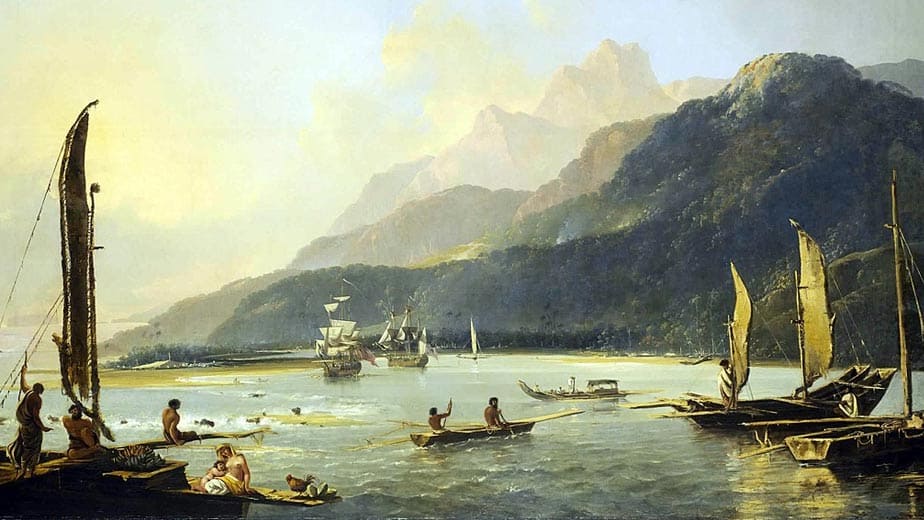 The Early History of French Polynesia

The islands were settled around 300 BC from Samoa. The Society Islands and the Marquesas were the first to be settled. The population called themselves Maohi. The island of Rahitea was then known as Hawiki. It still appears in many Polynesian legends, for example among the Maoris in New Zealand, as the land from which the ancestors departed.

Today, it is assumed that the waves of colonization to Hawaii, the Easter Islands, and New Zealand started from here.

The arrival of European sailors

The first European to land on the island was Fernando Magellan (1480-1521), who anchored there for a short time in 1521. In 1595, Alvaro Mendana reached the Marquesas. He was in search of the fabled southern continent. He named the islands after his master, Marquesas de Mendoza.

In 1767, the Briton Samuel Wallis, also in search of the southern continent, reached the islands. He stayed in Tahiti for several weeks. He took in new provisions and also discovered that one could make good barter deals with the inhabitants. For example, in exchange for a metal nail, one received satisfaction of the crew’s sexual needs.

The next to reach Tahiti was the Frenchman Bourgainville in 1768. When he returned to France, he reported there the noble savages and the permissive women.

Thus Tahiti became a paradise on earth, “La Nouvelle Cythère” was to inspire the fantasies of many men for the next centuries.

James Cook had come to Tahiti in April 1769 with the mission to observe and survey the transit of Venus during a solar eclipse. He stayed for three months and then sailed on to New Zealand. He took on board from the island the priest and navigator Tupaia, who had to leave the island because of political unrest.

The educated Tupaia was of great use to James Cook in his further voyage. He served him, for example, in New Zealand as a translator, which was not difficult for him, since the Maoris in New Zealand were also Polynesians and the languages are closely related. James Cook then found the abandoned mission station on his second voyage in 1777.

The Spaniard Boenechea arrived in Tahiti from Peru in 1772 on his ship, the Aguilla. Like all others before him, he claimed the islands for his nation. He established the first settlement in Tahiti. However, since the Spaniards were not successful with their missionary activities, they left in 1775.

In 1779, the crew of the later famous Bounty under Captain William Bligh (1754-1817) had spent six months in Tahiti. When the ship set sail again, the crew began to mutiny. The story of the mutiny has been described many times and has also been filmed. For more details, see Pitcairn.

Painting, Captain James Wilson for the use of the Missionaries

Beginning in 1799, the London Missionary Society attempted to Christianize the islanders. After they had successfully missioned the ruler Pomaré II. (1774-1821), the rest of the population followed. At the same time, numerous election catchers had also arrived on the islands. Unfortunately, the successes of Western civilization were mostly frightening.

In just a few years, the population was decimated from about 40,000 to less than 20,000 in 1829, due in part to introduced diseases against which they had no immune defenses.

In 1843 it was declared a French protectorate and in 1881 became part of the French colony of Oceania.

In 1881 the Gambier Islands were annexed and in 1900-1901 the Austral Islands. In World War 1, about 1,000 soldiers from Tahiti fought in Europe on the side of the Allies. In WW2, Bora Bora was a military base for 5,000 US soldiers. After WW2, in 1946, the islands became an overseas territory of France. On July 22, 1956, the islands were officially renamed French Polynesia.

Beginning in 1963, the French undertook nuclear tests on Moruroa and Fangataufa. The political opposition movement that arose as a result of the tests led to the ever-increasing independence of the internal administration of the island nation.

Who settled in French Polynesia?

Beginning in the 1830s, French missionaries arrived in these islands, sparking a series of rebellions and decades of gunboat diplomacy that culminated in 1880 with France annexing French Polynesia as a colony.

Why is Tahiti referred to as French Polynesia?

Tahiti was ruled by the Pomare Dynasty until 1880 when King Pomare V was persuaded to cede Tahiti and most of its dependencies to France. By 1958, all of Tahiti’s islands had been reorganized as a French overseas territory and renamed French Polynesia.

What did James Cook do in Grench Polynesia?

Cook established an observation post at the end of a sandy peninsula on Tahiti’s north shore, which he named Pointe Venus.

Cook used Tahiti as a base to discover the Society Islands northwest of Tahiti and the Australs to the south, before fully exploring the coasts of New Zealand and eastern Australia.