« Back to Tahiti Places

Home of the writer of the novel “Mutiny on the Bounty” 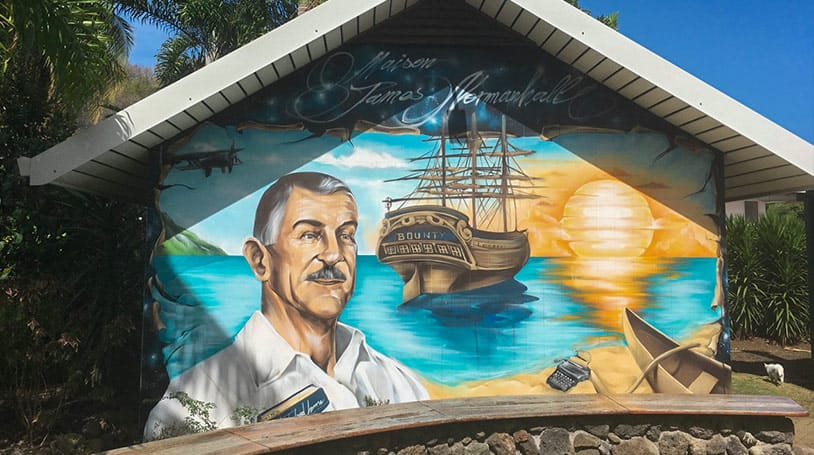 Visit the James Norman Hall Museum (La Maison de James Norman Hall) to observe how one family came up with their dream of living in paradise. Hall was a co-author of Mutiny on the Bounty, and he used the earnings from the novel to buy a slice of Tahitian beach and construct his dream home.

A simple museum dedicated to the remembrance of a modest man, James Norman Hall, is located about three miles outside of Papeete, the capital of French Polynesia. La Maison James Norman Hall is well worth a brief stop on your way to Point Venus or Matavai Bay, where Captain Bligh first anchored the Bounty in 1788, not only for what you’ll learn about the extraordinary life of a daring, adventurous, and courageous man, but also because the museum is testimony to what a few devoted family members — almost ancestor worshipers — can accomplish in the face of bureaucratic ennui and political opposition.

Best known for co-authoring the Bounty trilogy with his buddy Charles Nordhoff (“Mutiny on the Bounty,” “Men Against the Sea,” and “Pitcairn’s Island,”) Hall was a prolific writer, both with Nordhoff (12 novels) and on his own (17 books, countless essays, poems, and at least one play). The Hall House pays homage to his literary career as well as its Hollywood component, with nine films based on six of his books, including three versions of “Mutiny on the Bounty” and two of “The Hurricane.”

Hall, who was born in Colfax, Iowa, in 1887, finished at Grinnell College in 1910. In 1914, he was on a cycling holiday in Britain when World War I broke out. He immediately joined the armed forces, and by the end of the war, he had fought in three countries: the United Kingdom, France, and the United States.

Hall wandered the world after the war. He arrived in Tahiti in 1924 and married Sarah Teraireia Winchester, the daughter of an English sea captain and a Tahitian woman, the following year. In 1926, they moved into the house. Hall passed away in 1951. Following Sarah’s death in 1985, the house was sold to the French Polynesian government with the hope that it would be preserved as a memorial.

Hall’s little wooden cottage, which is surrounded by a beautiful garden, is now a museum. Exhibits are arranged around the author’s most renowned work, and you get a fantastic idea of his life in Tahiti from the 1920s through the 1950s.

The house where the family resided for nearly 30 years is still in its original form and very well preserved; inside, there is still all of the author’s furniture and library, as well as various portraits and mementos from Hall’s life, who died in Tahiti in 1951.

Take a guided tour of the house. Most of the time, the guides know the family directly and can tell you everything you need to know about them.