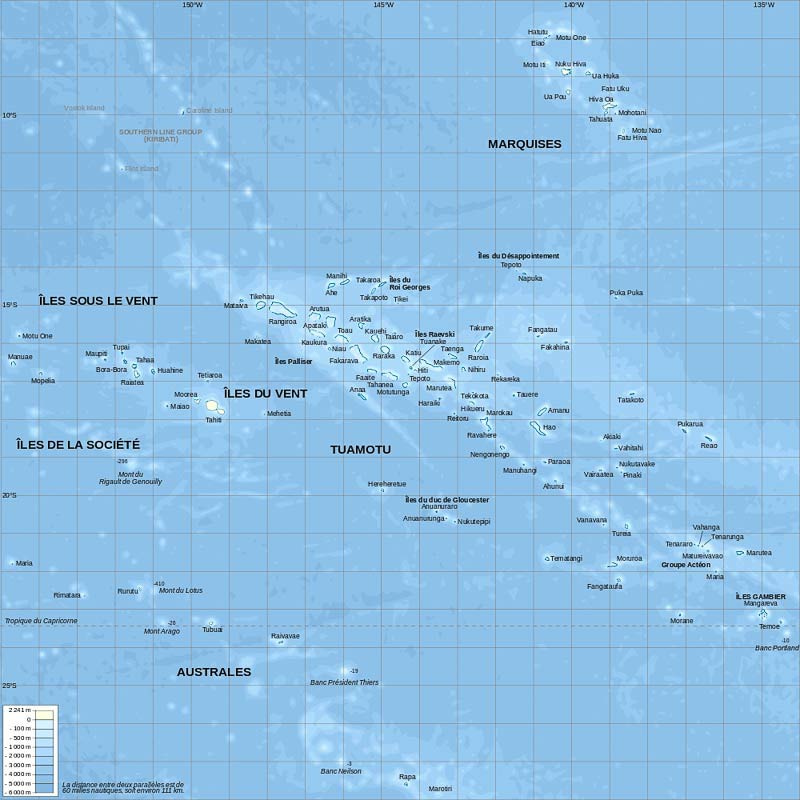 French Polynesia is a collection of five tropical archipelagoes located in the middle of the South Pacific Ocean, approximately 6,000 kilometers east of Brisbane, Australia, and 7,700 kilometers west of Lima, Peru.

The 118 islands and atolls make up a geographically dispersed collection that covers more than 4,500 square kilometers. They are a French overseas territory with limited authority. The Society Islands, the Gambier Islands, the Tuamotu Archipelago (the world’s largest chain of atolls, stretching 1,570 kilometers), the Marquesas Islands, and the Austral Islands are all part of French Polynesia (Tubuai Islands and Bass Islands).

The five island groups of French Polynesia have a very different appearance and consists of 118 islands and atolls distributed in the following five archipelagos:

Polynesia’s islands rise from the sea

The volcanic activity of “hot spots” positioned at the intersection of seismic faults gave rise to Polynesia’s islands. The movement of the Oceanic plate (which travels towards the northwest) causes these islands to shift, while the “hot spot” remains stationary. As a result, the craters that can still be observed are not extinct volcanoes, but rather remains of volcanic activity.

These volcanic massifs gradually sink into the earth’s mantle until they vanish from view (the only visible trace is then the coral reef, whose continuous growth compensates for the subsidence of the support: the islands are then called atolls, as opposed to the high islands which are mountainous).

However, while this model accurately describes the geology of the Society Islands (with a very young island – Tahiti – located in the archipelago’s south-east, whose planaria are still visible, and older islands, such as Raiatea or Bora Bora – located in the north-west), it is unable to account for the situation of the other Polynesian archipelagos on its own.

The ruins of the two volcanoes of Tahiti, the largest island, continue to rise to respectable heights (2,241 m for Orohena Mountain, French Polynesia’s tallest peak) amid broad valleys and lush alluvial plains on the flanks of which coral massifs have formed in certain places. Because of the low tidal range, the shores, which are protected by the coral massifs, are barely eroded by the sea and offer long basaltic beaches.

Tahiti and the other Windward Islands are unique in the world in that they are situated on an oceanic point where the moon’s tidal effect is essentially non-existent except at the start of the southern season (full moon of All Saints).

This one-of-a-kind feature makes beaches easily accessible at any time, but ports are tough to reach (provided that one crosses the shallow oceanic passes that are dangerous because of the swell). On the other hand, the cleanliness of the waters that a weak but regular oceanic current passes allows pearl production in shallow waters on the Polynesian atolls.

It also permits the construction of lacustrine settlements in clear-water lagoons. The oceanic swell has a lot of force because of the short and steep plateau, which creates incredible rollers along the beaches, making it a surfer’s heaven.

The Tuamotus’ atolls, a risk for seafarers

The Tuamotus’ numerous atolls make navigation risky in the area, and they are notorious for groundings. Their lagoon is fed by ocean water via a few passes (coral reef breaks), and the deep craters provide exceptionally cold and transparent waters, which contrast with the warm waters of the shallow lagoon shelves, which are home to diverse marine fauna and vegetation.

On the other hand, the lack of fresh water, or sometimes the complete lack of it, in the exposed areas permits only a very poor terrestrial flora, and these atolls, which are often deserted, are occupied primarily by crustaceans and serve as bird refuges.

The Marquesas Islands have no coral reef

The volcanic formations, on the other hand, are poorly eroded in the Marquesas Islands, whose geological development is more recent, and give a steep mountainous terrain studded with tiny valleys leading to short beaches with deep waters. There is no coral reef in the Marquesas.

Their terrain resembles temples rising from the sea, with waterfalls feeding extremely short brackish rivers that traverse the beaches, and the shoreline littered with little creeks surrounded by a tropical tree forest. The Marquesas Islands have archaeological monuments that give testament to colonization and some of the oldest Polynesian cultures, and its wealth has been cherished since ancient times.

Next: History of French Polynesia