You are here: Home1 / French Polynesia2 / People and Culture 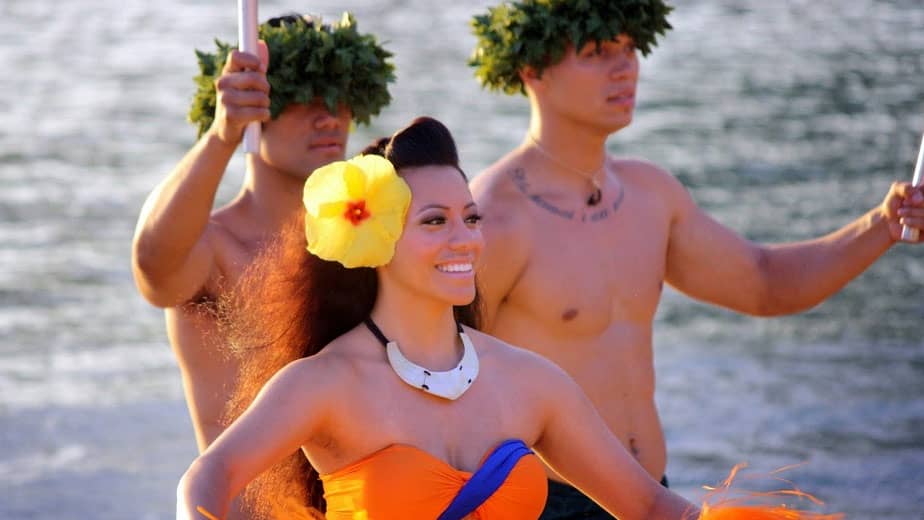 The population of Tahiti and her islands (245,405) is 83% Polynesian, 12% European, and 5% Chinese, who immigrated towards the end of the 19th century. 75% of the population lives on the islands of Tahiti and Moorea. In the capital, Papeete and its catchment area alone live 127,600 inhabitants.

The Polynesians are proud of their islands. They like to share their joie de vivre with visitors from all over the world. This joie de vivre is expressed not only in their own traditional dances but also in the joy of music.

The Polynesians show their passion for the sea in daily fishing, and surfing, but also in rowing in the traditional outrigger canoes, which is practiced as a national sport in all archipelagos.

Tahiti has a rich and expressive Culture

Tahitians today reflect the heritage of the rich, expressive culture of their ancestors, the Maori. To them goes back to the pulse of Tahitian life, a world where the paths of gods, warriors, and people cross in figurative legends. Where music, dance, and art emerged from the wonder of everyday island life.

Where spear-throwing began as a sport of the gods – the kings preferred surfing – and strong men competed in canoe races and stone lifting, as a sign of pure strength. Tahitians are proud of their homeland and culture.

This is reflected in the numerous events and festivals that every visitor can experience. Whether at the “Heiva i Tahiti dance festival” in July or at the Hawaiki Nui Vaà, the race in the traditional outrigger canoe.

How to greet someone in Tahiti?

Ia Orana, Maeva, and Manava are the three words with which the Tahitians greet or welcome their guests. In keeping with their legendary tradition of hospitality, they welcome strangers with cheerful songs accompanied by guitar and ukulele sounds and with a gift in the form of a tiare flower, the subtly fragrant symbol of the Tahiti Islands.

As an expression of the joy of meeting new people or seeing old friends again, the arrivals are decorated with colorful flower wreaths. Polynesians are generally proud of their islands and happy to live there.

Immediately after the discovery of the first islands, the myth of the island paradise in the South Seas spread like wildfire. Until today, the image of the Europeans formed at that time has persisted and this is mainly due to the fact that most of the stories are not just stories, but correspond to the facts. The Polynesians are exceptionally hospitable people. Even the flower necklaces to greet them are not a myth.

After their tribal cultures were suppressed by missionaries for centuries, they have been finding their way back to their old traditions and customs for some time now. This authentic image of Polynesia, with its regional cuisine, tribal dances, and body decorations, is also very popular with travelers.

The sacred stones of Polynesia

Stones have acquired a special significance in the millennia-old culture of Polynesia. From them were formed the images of ancestral spirits, they were considered guardians of sacred places and were the protectors of the family.

Stones served as a building material for the maraes, important sites for culture, and religious ceremonies. With the colonization and Christianization of Polynesia by the European seafaring nations in the 18th century, the Maraes disappeared under rubble and earth.

Today, locals are working with archaeologists and historians to decipher the stone messages of their ancestors and get to the bottom of archaic spiritual beliefs. On Raitea Island you find the impressive marae of Taputapuātea.

Polynesia is the largest Cultural area in Oceania

The island region of Polynesia is the largest contiguous cultural area in Oceania. It stretches from Hawaii in the north to New Zealand in the south, from Tonga in the west to Easter Island in the east.

Today, a total of about six million people live on the island groups, which are scattered over more than fifty million square kilometers in the Pacific Ocean.

The political and economic developments of the respective societies have accordingly varied over the past centuries. One thing, however, unites this huge cultural area: a special affinity for stones.

Where exactly the Maohi, the name of the original indigenous population of Polynesia, came from has not been clearly clarified scientifically to this day. The earliest finds suggest that the first settlers reached some of the islands from the west as early as 1500 BC in specially built wooden catamarans.

The Maohi believed in “mana”. It denotes a spiritual power that equally permeates and inseparably connects the otherworldly world of gods and ancestors as well as this worldly world of daily life.

In the eyes of the Polynesians, everything is permeated by this power – every stone, every plant, every mountain, every island, every animal, and every human being carries the mana corresponding to it.

Mana – the essence of universal power for Tahitians

Mana is the mystical and central life force of the Tahitians. It is the root of the duality of life and death. It is the essence of universal power, the heart of the Polynesian universe, the elixir of life, the formative elements, and the existential, cultural, and spiritual values created by the Polynesians/Ma’ohi who worship this universe.

Mana is purity (ma); it is grounded in life, humanity, respect, dignity, love, magnanimity, beauty, goodness, and peace of the living beings and things that coexist in harmony in the Ma’ohi universe.

Mana means wisdom (na/na’a); it stems from empirical, technical, and inherited knowledge, from common sense that naturally arises between people and their environment, from confidence in divine fulfillment, the state of grace that everything and everyone can achieve through the spiritual, cultural and worldly pursuit of universal mana, the promise of being reborn wiser, purer and more powerful.

What is Mana in Polynesian Culture?

Mana is the life force in all things and all living beings. You can see it. Touch it. Taste it. Feel it. From the moment you arrive, you will understand why the Tahitians say your islands are filled with mana.

It is the special aura, energy, and power that surrounds you as soon as you enter the islands. Mana shows you how important it is to give each other support or just let go. It shows you the way to escape your everyday life and simply switch off in the midst of an indescribable idyll and find the way to your inner self. The Islands of Tahiti is the name given to the group of islands.

The islands differ in part by high cliffs and deep gorges or by deep blue lagoons, where the black pearls are cultivated. But all these islands have one thing in common, the legends of the Maohi tribes, the countless archaeological finds from past times, and – of course – the Mana.

Religion plays an important role in Polynesian society. 45% of all Polynesians are Protestants, 34% are Catholics, and there are smaller groups of Mormons and Seventh Day Adventists.

Many church organizations oversee youth clubs and thus play an important role in social and political life. Despite the modernization of contemporary Polynesian society, hospitality is a living tradition that has lost none of its authenticity and spontaneity.

What is the Polynesian culture famous for?

Polynesian cultures demonstrated a highly practical approach to environmental exploitation. Their languages are rich in terminology for stars, currents, winds, landforms, and directions, reflecting their systematic observations of the natural world.

What do Tahitian eat?

A typical Tahitian meal includes both raw and cooked food items such as fish, seafood, meat, various root crops (sweet potatoes, yams, and taro), and a variety of exotic fruits and desserts, all washed down with Tahitian punch, beer, wine, or coconut water. Make sure you know the various delicious food Tahiti has to offer.

What exactly is a marae in Tahiti?

To worship their gods, ancient Polynesians built temples known as marae. These religious sites, which are made up of various stone and block structures, can be found on the majority of Tahiti’s islands.

What are the Tahitians famous for?

Tahitians are widely regarded as some of the world’s most genuinely friendly and kind people. However, Tahitians are also known for being a little shy.

In French Polynesia, what is mana?

Mana is a spirit and life force that surrounds and connects all living things.