You are here: Home1 / Island2 / Rangiroa 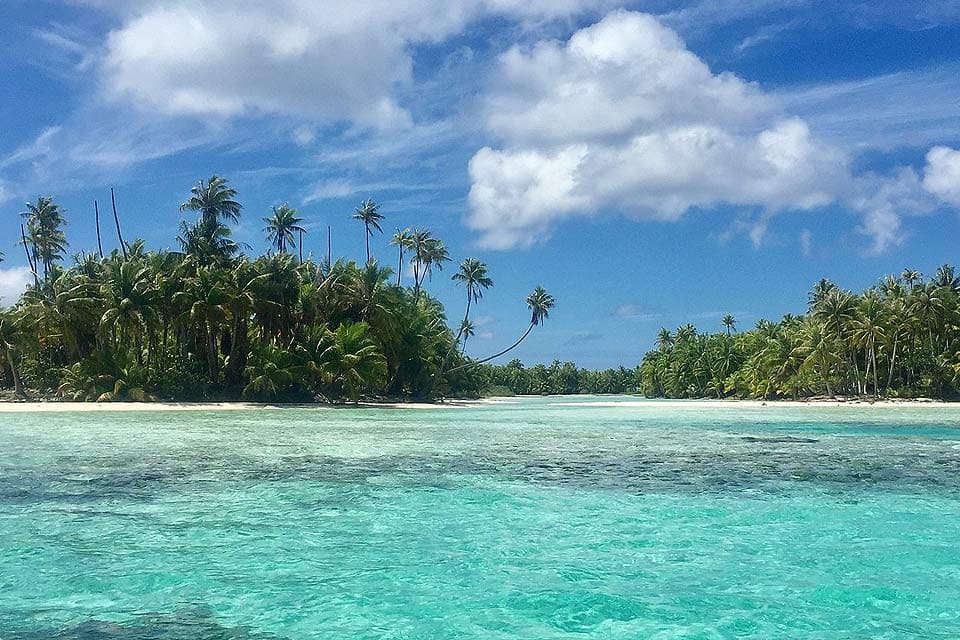 The second-largest atoll in the world, Rangiroa, is a location where land and sea come together in an unfathomable unity. Moana-tea, the tranquil sea, characterizes the lagoon, while Moana-uri, the wild ocean, enchants visitors with whale, manta ray, dolphin, and shark parades.

This lovely ring of islands is bordered by two separate seas. Unspoiled views of the South Pacific can be found in the villages on the islands of Avatoru and Tipu

Churches with coral decorations, neighborhood eateries, bakeries, and modest shops can all be found along the area’s few roadways. At Dominique Auroy Estate, where three varieties of grapes flourish between coconut trees and fields of black pearls dispersed in the lagoon, visitors may expect to partake in wine tasting.

The island of Rangiroa belongs to the Tuamotu Islands and is around 220 kilometers northeast of Tahiti, and flights to it are often available from Papeete. Rangiroa is also known as “Rairoa” in Polynesia, which means “infinite sky.”

This also explains why Rangiroa is known as the “Infinite since it is an extremely long atoll, with only a broad lagoon visible at its conclusion.

The Rangiroa tourism industry has a very sophisticated infrastructure thanks to many diving tourists. On this atoll, as on Tikehau, nature is the primary draw.

You should choose one of the larger French Polynesian islands like Bora Bora, Moorea, or Tahiti if you want to experience museums, marae, or other cultural treasures while you’re on vacation.

On the other side, Rangiroa is a safe place for enthusiastic divers, snorkelers, anglers, and fans of water sports.

How to get to Rangiroa

Best Things to do in Rangiroa

One of the great tourist attractions on Rangiroa is the winery in front of Avatoru, which is a unique kind of wonder. Dominique Auroy, a Frenchman, has been cultivating “Vin de Polynesie Francaise” on a tiny motu since 1998. In fact, great wines that are sought after globally have been made here for years.

The ideal conditions for viticulture are found on the small coral islands of Rangiroa, which were created from dead coral thousands of years ago.

The growth of the grapes is ensured by the calcareous soil, the addition of nutrient-rich compost, and the steady tropical temperatures. On Rangiroa, the grapes are even picked twice a year in May and October.

This is the epitome of South Seas! One of the main draws of a journey to Rangiroa is a visit to the Blue Lagoon, and with good reason—nature has produced an unparalleled treasure here that cannot be duplicated.

The journey to the lagoon is a one-day excursion that can be scheduled with local businesses or, more frequently, directly with on-site lodging.

It is well worth the relatively lengthy one-hour boat ride to the lagoon because it is here that the coral reef forms a little natural pool, resembling a lagoon within a lagoon, which is ideal for swimming and snorkeling.

It’s also worthwhile to see the Pink Sands of Rangiroa (Les Sables Roses) (about a 1.5 to 2-hour boat ride from Avatoru). Depending on the light, pink shells that have been swept ashore by the waves, this beach has a distinctive color.

A different excursion is to the coral island of Île aux Récifs, which requires a boat voyage of roughly an hour. A reef in this area was raised above sea level (“feo”) and now stands up to 2 meters out of the water as a result of the tectonic shifting of the earth’s plates. The resulting fossilized silhouettes are a truly unusual sight.

Visitors can get a close-up look at the raising of black pearls at the Gauguin Pearl Farm. The explanation is thorough and extremely simple to understand (in English).

What could be better than buying a black pearl right here, from the associated shop, which sells pearls in all sizes and grades?

The tourist life is located seven kilometers to the east, between Rangiroa’s two largest communities, Avatoru and Tiputa. The final short distance to the motu on which Tiputa is located must be traveled by boat, but otherwise, the two communities are nearly entirely connected by a road made of coral dust.

Coral-built churches, the town hall, post office, banks, long-standing craft, and souvenir shops, snack bars, and restaurants, as well as the majority of the lodging, are all located here.

Underwater, things start to get fascinating for divers. Each location is situated directly on a broad reef passage called Rangiroas. Strong currents created by the water channels are what give the ocean floor its unparalleled diversity of plants and wildlife.

At Tiputa Pass, dolphins can frequently be seen playing in the surf and jumping around. They are visible from the shore.

Snorkeling and diving in Rangiroa

While Rangiroa’s flora and fauna are not particularly diverse on land, there is an unparalleled underwater world there that draws many divers to the South Sea island every year. Even though Rangiroa offers basic courses, you should have some prior diving experience to dive there.

But one of the absolute highlights is the drift dive through the two passes, which are doable at high tide. These drift dives are a little more difficult and can be extremely physically taxing.

More than 600 different species of coral fish, as well as whitetip reef sharks, dolphins, hammerheads, whale sharks, and turtles, can be found since the current always brings lots of food there.

With any luck, you might also spot silvertip sharks in Avatoru Pass, which are often restricted to far deeper waters. On practically every dive in Tiputa Pass, you can observe bottlenose dolphins and enormous schools of barracudas.

Eagle rays and hammerhead sharks may also be seen here, depending on the time of year.

Take advantage of the 13 miles (20 kilometer) out-and-back track in the area of Avatoru, Rangiroa. The course is generally regarded as easy and can be finished in 4 hours and 20 minutes.

Although the trail is great for mountain biking and hiking, it is uncommon to run into other travelers. The path may be traveled during all seasons of the year and is worthwhile.

Is there an ATM on Rangiroa?

Just across from the airport ‘terminal,’ at Rangiroa, there is an ATM. On the other side of the pass, in the village of Tiputa, is also an ATM.

What is the best diving spot in Rangiroa?

The Tiputa Pass and its surroundings are where most diving takes place. You might encounter dolphins and other “big fish” there. Additionally, once or twice a week, dive shops travel to Avatoru Pass to view silvertip sharks.

What is the main attraction in Rangiroa?

Rangiroa’s lagoon is undoubtedly its biggest drawattraction, but there are many entertaining activities accessible on dry land to supplement the many water-based ones. Beautiful coral churches, modest neighborhood eateries, and cute boutiques are located alongside her roadways and are well worth a visit.