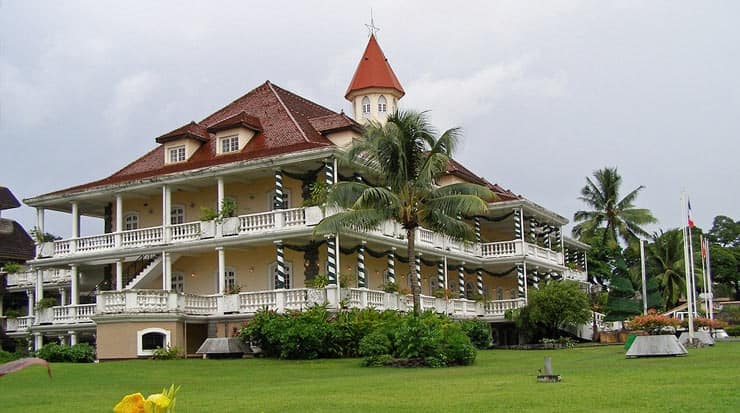 This stunning structure, which was completed in 1990 and is also known in French as the Hotel de Ville and Mairie, is a recreation of Queen Pomare’s residence, which formerly stood in Place Tarahoi and was under her rule when Tahiti became a French Protectorate in 1845.

The town hall, which houses the mayor’s office, is accessible to the general public during regular business hours and whenever historical and artistic exhibitions are hosted in the third-floor gallery. The two-story, large terraces of the yellow building are adorned with balustrades and columns.

In between Paul-Gauguin Street to the south, Père-Collette Street to the west, École-des-Frères-de-Plormel Street to the north, and Remparts Street to the east, Papeete Town Hall is situated on a parcel of land that is more than one hectare in size.

Its construction started in 1988 and was designed by Rodolphe Weinmann, who drew inspiration from the previous Pomare royal palace. On May 16, 1990, in honor of the centennial of the Papeete commune, it was opened by President of the Republic François Mitterrand.

Two principal structures make up this city hall. The mayor’s office and the town council room are located inside the town hall, which is made of red-glazed tiles and topped with a bell tower.

On the walls of the council chamber are portraits of Papeete’s past mayors, all of which were red chalk paintings by German artist Ursula Vincenti-Sekinger, also known as Uschi (1941-2020).

The town hall is a nice, spotless, almost opulent building with marble floors, chandeliers, and meticulously chiseled grids. We seek aesthetics in addition to functionality in everything.

Be sure to look inside and see the rococo elevator and the municipal council chamber with its etched glass murals illustrating the history of the city.

The grounds surrounding Papeete Town Hall were embellished with water features and massive statues known as “the colossus of the gardens.” The frequent dance performances there consequently take on a magical quality.

The town hall also houses the reception area, general services administration, and a number of departments, such as the registry office. The other offices are gathered in a two-story, more administrative-style building at the back that is covered in wooden shingles. The basement has been transformed into a contemporary, automated parking lot.

City Hall, one of the cultural hubs of the city, conducts several events all year long, including in its gardens, which feature a meeting house (fare potee) in traditional design with a roof made of woven pandanus leaves and several stone tikis (statues representing a god, spirit, or hero).

A post shared by see the world up side down (@chris_upsidedown)