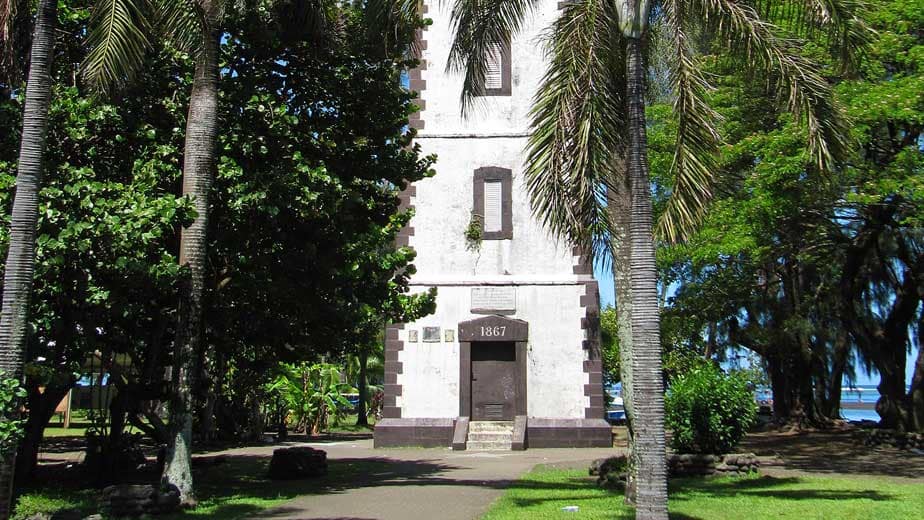 Captain James Cook established his observatory at Point Venus (La Pointe Venus), one of the island’s most beautiful locations. The transit of Venus, which occurs only once every century or so, allows watchers on the ground to see the planet move across the sun.

The Lighthouse (Phare de la Pointe Vénus), was built in 1868, 99 years after Cook’s voyage. The Pointe Venus lighthouse is one of the most photographed monuments on a Tahiti. The whitewashed, six-story lighthouse is located at the northern end of Matavai Bay.

Where does the name Pointe Venus come from?

For the record, the Pointe Vénus was named after Captain James Cook, who arrived there in 1769 to see the transit of planet Venus in front of the sun.

Cook captain of the Endeavour arrives in Tahiti on the 13th of April 1769 with the intention of observing the transit of Venus, which was originally scheduled for the 3rd of July 1769. This expedition was supposed to be used to calculate the distance between the Sun and the Earth. His notes are still one of the most comprehensive sources of information on ancient Polynesian society.

The lighthouse (Phare du point De Venus) has been built in 1867 and has been demolished in 1953. Thomas Stevenson built this square 8-story, 25-meter-high structure out of rubble and coral with the help of masons from Mangareva masons.

After being abandoned for 50 years to benefit the port of Papeete, Pointe Vénus has regained popularity among foreign visitors and attracts an increasing number of visitors each year.

The lighthouse of Point Vénus, which is still in use today, is a reminder of the evolution of Pacific history, guiding ships as they approach Tahiti. It is also used for aerial navigation.

La Pointe Vénus, with its long black sand beach, emerald water, and rich history, is a charming destination in Tahiti and a place steeped in history and a symbol of the meeting of Europeans and Tahitians, is an ideal spot for a stroll, a swim, some surfing, and learning more about Polynesia’s history.

What more happened at Matavai Bay?

After a five-month journey across the Pacific, the captain of the ” Dolphin” arrives at Tahiti in 1867 and docks in the bay of ” Matavai.”

Before arriving, the Dolphin had already sailed along Tahiti’s coast and passed through a number of shallow bays, each more enticing than the last.

So, why did you choose Matavai Bay? During his voyage around Tahiti, Captain Samuel Wallis tried to dock in a variety of bays, starting with Mataiea, Papeari, and Taravao in the south before heading to the east, along the coast of Mahaena.

Alternatively, hundreds of sailing pirogues are launched from the river to meet the Dolphin. The captain, Wallis, prefers not to take any chances and hence declines to accost in the face of hostile demonstrations.

Nonetheless, the exhausted crew has run out of water and lives, which is why they decide to throw the anchor, whatever it may be. They choose Matavai Bay, which is undeniably one of the most appealing.

Unfortunately, when they approached Matavai Bay, the captain’s ship, the Wallis, collided with a rock and became immobilized for more than an hour. Immediately, dozens of pirogues affluent in order to capture the ship. Since then, this coralline bank has been dubbed the “Banc du Dolphin,” in honor of the ship’s demise.