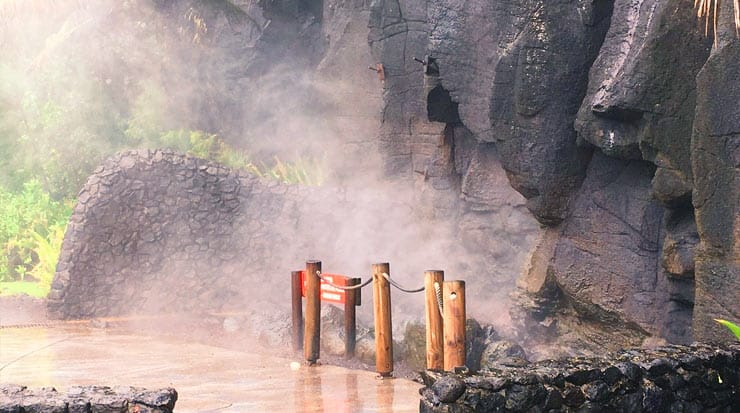 Water rushes into a cavern and if the swell is just right it shoots out through the hole in the rocks, like a geyser. There’s a viewing platform and if the sea’s rough, you could get wet.

Located by the road just before Tiarei at PK22. Look out for the signs denoting the French name Trou du Souffleur. The blowhole is where the road bends around a corner and you’ll see a parking area just beyond it. Just past the blowhole, there’s a beautiful black-sand beach sliver that makes a great place for a picnic. You’ll sometimes even find vendors selling fruit here.

This hole of the prompter, also called a maritime geyser, is in fact an underwater cave that is prolonged by a chimney, an old lava tube, the end of which gives at the foot of the rocky wall at the edge of the old road of the belt, now disused.

Residents of Tiarei tell us that when the wind was favorable, the sound of the blowhole could be heard as far as the village of Tiarei, 4 km away.

The Anahoho cave, better known as the “Blowhole,” is a historic site that has long served as a stopover for Polynesian families touring the island.

At the time, there was a road to visit, the Arahoho, which means “howling road”. Today, this road no longer exists but has been replaced by a fully equipped passage that tourists can safely visit the blowhole.

This lava tube was formed several million years ago by the passage of a viscous lava flow through the current basalt cliffs. The waves rushing into the underwater cave cause a geyser to gush through the hole, which, depending on the power of the wave, causes a long, noisy blast that is quite spectacular.

It is said that it was from this cave that the warriors of Tiarei threw the lifeless bodies of their enemies, the warriors of Papenoo. But what impresses the visitors today remains the noisy and often impressive breath that emerges from it.

Another site that is easily accessed right off the main road. There are holes in the volcanic shoreline that, when rushed by the incoming waves, generate a soft but very loud whoosh, apparently similar to a whale’s blowhole.

There is a large one right by the path you walk up, and it just might scare the crap out of you if you’re completely unsuspecting. There is another, smaller, hole right on the shoreline.