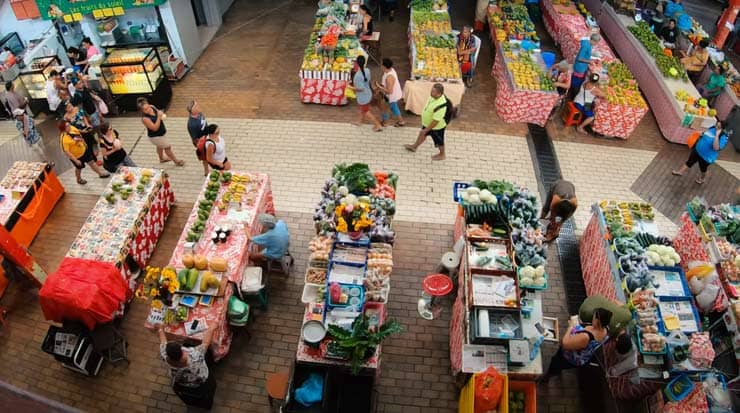 Le Marché, a 155-year-old public market, is the best way to shop for just about anything from all the islands. The market is in the middle of Papeete, two blocks from the water. You find many shops on both levels selling everything from vegetables, fruits, fish, pearls, carvings, and clothing to the usual tourist mementos.

Sunday is the best day to visit

We recommend visiting the market on an early Sunday morning as the atmosphere is like no other when all the families living in the suburbs of Papeete come to get their supplies.

All the local products are here, lined up, and presented on panels explaining the history, the cooking, and the Tahitian names of vanilla, coconut, etc. Coconuts are offered in several ways: you can drink them with a straw, or you can get bottled coconut milk, coconut flesh, and all sorts of coconut cakes.

You’ll find freshly caught fish like tuna, mahi mahi, parrot fish, and red snapper. Seafood lovers will find lobster, crab, sea urchins, and also clams. They are fished in the lagoon or off the coast in the five archipelagos and sent by plane to Papeete.

Flowers of all kinds are sold all the time, whether you need a tiare for the ear or a big crown. They all make up a fascinating patchwork of scents. Monoi, vanilla, jams, and pastries are also on offer.

On the second floor, you’ll find snacks and souvenir vendors of all kinds. Also, local handicrafts are offered which are great as souvenirs: various pareos, flowered shirts, carved objects, basketry, tikis of all sizes made of mother-of-pearl, stone, or precious carved wooden canoes, hairpins, bracelets, necklaces, etc. Everything is handmade and engraved with traditional patterns.

Some of the best black pearl shops are here. They aren’t as high-end as Robert Wan pearls, but the pearls are very good quality and the prices are reasonable.

Most of the products on the market are authentic, and the work is of high quality. Some of the crafts are made to order in Indonesia and are almost indistinguishable. Look at the origin, the quality of the work, and the material used, and always ask before buying.

The British built Papeete in 1818, and in 1827 it became the home of the local royal family. In 1843, France took over the island and took care of it.

The city became the capital of Tahiti right away. Until a French-style government was set up, it was run by order of the Governor of Oceania.

The current market opened in 1987, and the latest covered building has three times as much space as the old one. The most important change was the addition of craft stands on the mezzanine, which is the level above the stalls.

The current building is 2 stories tall and has a total surface of more than 7,000 m2. The handicrafts are all on the first floor, which is set up like a mezzanine and looks down on the food on the ground floor. Just outside of the building, there are many shops that sell a wide range of goods.

What can you buy souvenirs at Papeete market?

Locals were selling everything from fresh fish to pearls to scented oils to carvings to flowers and everything in between at the market. There’s no doubt that this is a good place to buy souvenirs and pearls. Some shops take credit cards, but you should always bring cash.

What is a well-known market in Papeete called?

In every way, the public market in Papeete is the heart of the city. The municipal market is called “Le Marché,” and it is the best place to find local Tahitian goods and produce when you are shopping in Tahiti. It is just one block from the water.

When should you go to the Papeete market?

Go in the morning, when most people in Tahiti are busy. The market seems to be busiest between 8 and 9 a.m. during the week. Even if it’s open longer, you should go close to the start because the best things sell out quickly. You can also eat lunch for breakfast if you want to.

What kinds of handmade items can you buy at the Papeete market?

People also sell flowers, Tahitian pearls, sarongs, artwork, and other things on the covered walkway outside the market.