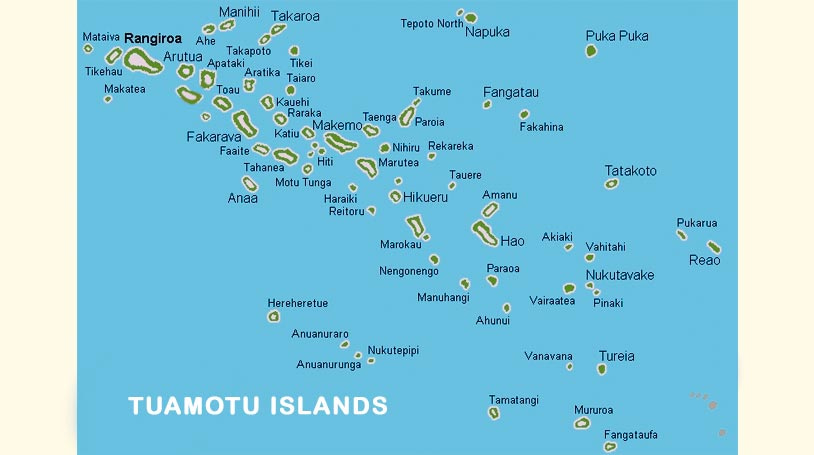 The Tuamotu Archipelago (former names: Paumotu Islands, Dangerous Islands, Low Archipelago) is a group of islands belonging to French Polynesia in the South Pacific, east of the Society Islands.

This world’s largest group of coral atolls includes 78 atolls of varying sizes with countless individual islands (motu) as well as three high coral islands. 45 atolls are inhabited by a total of about 17,000 people, mostly of Polynesian origin.

The islands extend over 15 degrees of longitude and ten degrees of latitude in the South Pacific, from Mataiva in the north to Temoe in the extreme southeast, for more than 2000 kilometers.

They are located between 14° and 23° south latitude and between 135° and 150° west longitude, covering more than 2 million km², an area larger than Western Europe.

350 kilometers northeast of Tahiti, Rangiroa is the best-known stopover in the Tuamotus. Its name means “immense sky”.

The horizon is reflected in a gigantic lagoon, the end of which you cannot see when you are on land. Measuring 80 kilometers long by 30 wide, Rangiroa is the largest atoll in Polynesia.

Fernando de Magellan discovered Puka Puka, the first atoll discovered by Europeans in the Pacific, on January 24, 1521. A few years later, on his journey to Tahiti Island, Louis Antoine de Bougainville traveled inside this amazing maze, but it would be several years before Europeans finished researching the archipelago: the final atoll discovered was Ahe on September 6, 1839, by Charles Wilkes.

These atolls were placed under French protection in 1844, and France annexed them in 1880. For more info on history, read our article French Polynesian history.

All of the Tuamotu islands (except Makatea and Tikei, which were formed in this manner originally) are formed by a narrow, partially emerged sandbank covering a double coral reef formed on the atoll of an ancient volcano, whose central crater collapsed but whose inner and outer slopes gave rise to the coral reefs.

These ancient volcanoes arose atop the numerous hotspots that dot the fissures that run the length of the deep yet shallow South Pacific tectonic plate.

Only the inner coral mass (of more recent creation) may occasionally emerge, shielded from ocean currents by the outer coral mass regularly pummeled by the waves, while between the two gathered sands, obtained from these coral masses or from the oldest volcanic rocks.

These sands gradually cover the internal coral mass, whose radius shrinks around the central chimney, which becomes more and more abrupt as their level rises, while the external coral mass’s radius shrinks due to wave erosion bringing the sands or by the death of the corals caused by the acidification of the oceanic waters.  Interested in more geography? Check our French Polynesian geography here.

Aside from these groups, there are 33 islands that are too far apart to be grouped. Tourists can visit the majority of the islands. The Tuamotus Archipelago has a tropical rainforest climate with significant rainfall all year. The daily average temperature is roughly 30 degrees Celsius.

Some atolls (which are sometimes made up of multiple islands, reefs, or banks) and solitary islands are geographically classified and classified into groups and subgroups.

Unless otherwise specified, the names in the lists below refer to atolls, which frequently lend their name to their major island (and not to isolated islands or secondary islands of the atolls to which they are geologically attached).

The coral islands’ weak soil does not promote plant diversity and, in general, only allows for subsistence agriculture. Coconut palms, from which copra is derived, are vital to the economies of these islands. Vanilla is also grown on several of them. Yams, taro, and breadfruit, as well as other tropical fruits, are the principal crops.

The fauna is primarily made up of birds, insects, and a few reptiles. There are only 57 bird species, 10 of which are indigenous and 13 of which are threatened. The seabed, on the other hand, is extraordinarily rich. Do you like to dive deeper into flora and fauna? Check out our article about French Polynesian flora and fauna.

The lagoons are brimming with life, with over 400 different types of fish inhabiting these enchanted areas. Because of this variety, the Tuamotus have become one of the most spectacular scuba diving locations in the world. The famed black pearls, which are uncommon and unique in the world, can be grown in crystal clear waters.

The climate of the archipelago of the Tuamotu islands is of a humid tropical type, with relatively distinct seasons. The climate of these islands of French Polynesia is very similar to that of the Society Islands, although less rainy due to the absence of reliefs.

The hot and rainy season runs from November to April, with maximum rains in the months of December and January. The coolest and driest season runs from May to October, this is the best time to visit the archipelago. Read more about the Climate in Fench Polynesia here.

The Tuamotu-Gambier division (in French Polynesia) is made up of 16 administration districts in the Tuomoto Archipelago and one district in the Gambier Islands. These communes are frequently named after the main island of the atolls they manage, but several minor atolls are now permanently abandoned but have been converted into protected natural areas:

How to get to the Tuamotu Archipelago?

Air Tahiti flies to Rangiroa four times a day, twice daily to Tikehau, and daily to Manihi and Fakarava. The region is covered by two Air Tahiti Nui passes, however they may only be used if you stay for a month or more: the Lagoon Pass and the Bora Bora/Tuamotu Pass will save you money.

Where is the Tuamotu archipelago located?

What is the total number of islands in the Tuamotu archipelago?

The 76 islands and atolls of the Tuamotu Archipelago are spread across an area of more than 700,000 sq. mi. (2 million km2) in the South Pacific and include magnificent pink sand beaches bordered with swaying coconut palms and a crystal clear ocean that’s warm to the touch.