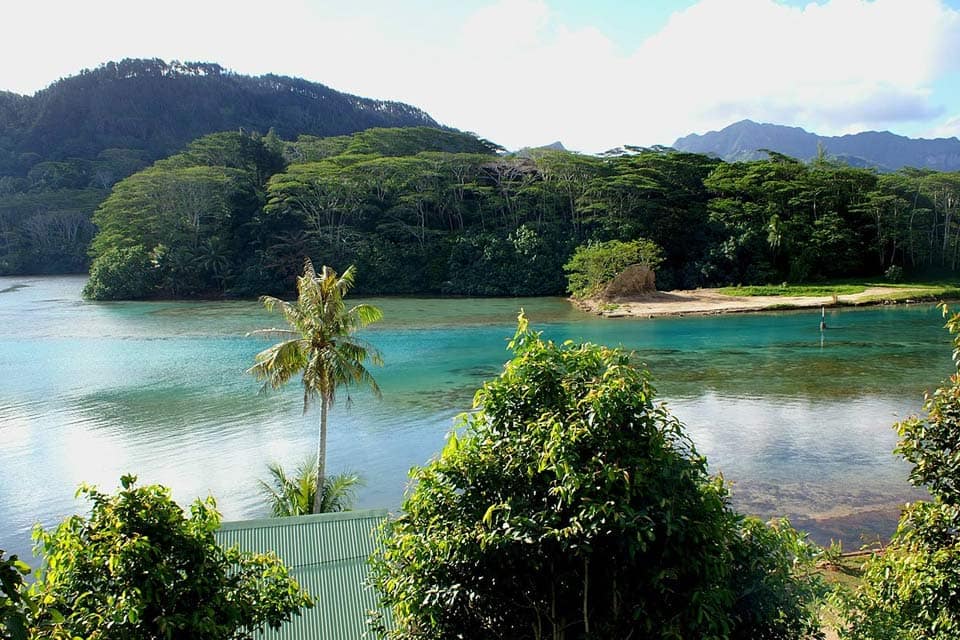 Huahine – the garden of Eden

With its lush forests, untamed environment, and charming settlements, the magical island of Huahine can resemble the Garden of Eden. One of the Islands of Tahiti’s best-kept secrets and a place where you may experience local life is Huahine.

The two islands that makeup Huahine are encircled by a vast, clear lagoon; stunning bays and white-sand beaches add to the drama of the setting. Traditional French Polynesia moves more slowly and peacefully on Huahine Island, which hasn’t been changed much by the modern world.

There are just eight tiny towns on the island, but those that do exist extend a warm welcome to guests. The rich soil in this beautiful world makes it no surprise that local farmers can grow a lot of bananas, melons, and vanilla.

Huahine, the easternmost atoll of the Windward Islands and the third-largest Society island, is situated roughly 175 kilometers west of Tahiti. Huahine, which the locals sometimes refer to as Matairea, is known as the “Garden of Eden” because of its lush surroundings and diverse gardens.

Huahine is made up of two islands: Huahine Iti, which has the prettier beaches, and Huahine Nui, which is larger and has Fare as its capital. A 54 yard (50 meter) bridge connects the two main islands.

The coral reef completely encircles both areas, but even here, there are still a lot of little motus within the lagoon that beckon tourists to take a boat ride to their fine sand beaches.

How to get to Huahine

Most trips to Huahine start with a flight to the island’s airport. The airport is situated on Huahine Nui’s northern coast. Air Tahiti serves the island with regular flights from Papeete, Moorea, Raiatea, and Bora Bora, which are all close by. There are many ways to get around Huahine. Taxis, public transportation, rented cars, bicycles, motorboats, and sailboats are available options.

The resort restaurants on the island offer opulent, traditional Polynesian dances by the top musicians on the island. You can visit the eateries at the Hotel Maitai, which is close to Fare Town, or the Relais Mahana, which offers a quaint, local feel of the remote southern island.

You might also want to check out the few roulottes and snack bars, which are great places for small groups and picnics.

Best Things to do in Raiatea

Between Fauna Lake and the foothills of Matairea Hill, you find numerous very well-preserved ancient marae, second only in size and scope to Raiatea’s great cult site of Taputapuatea. Interested visitors should begin their tour of the site at the Fare Potee, a thatched house in the western part of Maeva village.

The Fare Potee represents an oval-shaped meeting house of the ancient Polynesians. The building is a replica of the original house destroyed in a hurricane in 1925 and now houses a small archaeological museum that is well worth seeing.

From there, you can reach six large maraes and countless smaller stone structures, which are also spread all over Matairea Hill. Besides the ceremonial platforms around the Fare Potee, which were the defense, assembly, and ceremonial sites of the original eight tribes of the island.

Marae Anini, made of substantial coral blocks and situated right on the water, is at the southernmost point of Huahine Iti. It was dedicated to the gods Hiro and ‘Oro, the god of war (the god of thieves and sailors).

At least 14 human sacrifices were remembered by the marae’s final priest, Hiro, who revealed his memories to the Reverend William Ellis in 1818. Small flat surfaces were regarded as beds for the gods Oro and Hiro.

Priests and leaders may relax and lean on standing stones, which could also act as memorials for late chiefs. When a kid from a lower line was adopted, the royal family created a little marae with standing stones in the area near the road.

The location of the house of Oro is shown on a platform that is far from the enclosure. A person was sacrificed under each pillar of the house.

This marae, which served the Huahine Nui people, was a place of devotion for Tane, the main deity of Huahine. Tane was Huahine’s god of war and fish. On the marae Manunu, there was also the worship of the god Oro, who was later introduced.

Raiti, the final high priest of Maeva, is buried beside the ava’a (bed or platform for a god). One of the marae’s stone blocks collapsed when he passed away in 1915. He was laid to rest where the marae once stood, as per his last desires.

The foundations for a small fare pote’e, a round house that houses sacred objects and ceremonial artifacts, are located within the marae. You can notice a turtle petroglyph on the stone block facing the airport in Hawaii if you look closely. The god was said to be reflected in the sea by the turtle.

Ariiura Paradise Garden, a sizable camping area, is where the garden is situated. The eco-campground on the little island of Huahine, have built a garden with traditional Polynesian medicinal plants next to their location, which is about an hour’s drive from Fare on Bouraye Bay.

The primary point of entry for all tourists and the beginning point for all tours is Fare’s major town. All offerings, whether for a glass-bottom boat trip, a snorkeling excursion, or historical guided tours, often begin with Fare.

Most of the restaurants and shops on the island are in the village, which has only a few streets and is on a long beach in the middle of a lush oasis.

For those who enjoy lobster, a trip to Mahi Mahi with its sizable live lobster aquarium is ideal, and the Temarara restaurant at the western entry to town offers the best sunset views in town.

At the Hitimahana boutique, which is located across from the harbor, you may get fantastic mementos, such as South Seas costumes, jewelry, and frangipani flowers. Pacific Arts, which sells beautiful images of South Seas scenery among other things, is a little more expensive.

Northeast of Fare, next to the larger of the two lagoons known as Fa’una Nui, is the town of Maeva. It is well known for its farming. The antique stone fish traps are still in use today. They line up around this real settlement, together with many marae and other mute witnesses of the past.

Under a fare pte’e, a house where knowledge, sacramental practices, and rituals were once imparted, is a modest, educational museum. Here are displayed various artifacts and discoveries from archaeological digs, including paddles, axe shafts, pendants made of fish teeth, pestles, and tattoo combs.

The lagoon surrounding the village of Maeva still has fish traps in use today. Large nets are used to catch the fish once they enter between the openings in the rising and lowering tides. Due to the fact that the park retains the fish it has caught, this practice is also a very basic form of aquaculture. These fish traps used to be a plentiful source of food for the chiefs’ family.

The Huahine Lagoon is magnificent, and many of the pristine motu is only accessible by boat. On a tour of a lagoon, there are many stops where you can snorkel, swim, feed fish, or visit a small island called a motu.

The Blue-Eyed Eels in Faie

The endangered blue-eyed eels have been domesticated by people for hundreds of years, reside close to the settlement of Faie, and are revered. Although these eels are freshwater creatures, they have the ability to climb onto land, particularly if there is food there for them to find.

These massive 5 to 6-foot (1.5-2 meter) -long fish emerge from their homes in tiny caves and holes beneath the bridge to feed in the river’s freshwaters. Locals and tourists often feed them mackerel, and the eels are happy to come up close and almost steal the food out of your hands (they do have big teeth).

What truly astounds is the eels’ stunningly blue eyes, which are almost porcelain blue and almost glow in the water.

Huahine is a island located in the Society Islands archipelago of French Polynesia. It is known for its rugged, mountainous terrain, beautiful beaches, and rich cultural history. Here are some facts about Huahine:

How is Huahine compared to Moorea and Bora Bora?

Because of this, though, Huahine has kept the charm and originality of early Polynesia. The people who live there are proud of how well they take care of what they think is the most beautiful island in Tahiti. When our clients visit, Huahine often becomes their favorite island, and they return again and again to see the same landscape.

Is the word Huahine the same as Vahine?

The word “Huahine” comes from the Tahitian word “vahine,” which means “woman.” The name probably comes from a mountain ridge that looks like a pregnant woman, which is a sign of the island’s fertility.

What is Huahine Island known for?

Huahine Island is known for huge coconut plantations, vanilla orchids, banana groves, breadfruit trees, and watermelon fields, that can be found throughout Huahine’s tropical jungle. Huahine is also known as culturally conserved sanctuary with sacred temples concealed within dense jungle, in addition to its beautiful scenery and vibrant blossoms.

What water sport activities are available on Huahine?

Around Huahine island, water sports are widely available. The easiest thing to do is to enjoy the stunning Huahine beaches’ white sand. The Fitii break on Huahine Nui’s western coast offers reliable waves for surfers.

The huge reaches of the lagoon can be explored on jet skis. The underwater world of reef walls, fish caverns, and coral gardens is best explored when snorkeling. Enjoy an outrigger boat adventure while remaining on dry land.

Huahine’s aquatic life can be enjoyed without getting wet. Go deep-sea fishing, embark on a lagoon boat trip, or sail through a French Polynesian sunset.

How to get around on Huahine Island?

Huahine is not very large, but the island is nonetheless too large to travel around on foot or by bicycle. You can pick between renting a car and a scooter. On the island, there are a number of vehicle rental agencies, including Avis and Europcar.

Are there pearl farms on Huahine?

Before the tiny settlement of Faie, in the bay, sits the “Huahine Pearl Farm.” You get there in a small outrigger boat. Spend some time here to discover how the pearl is created and how the nucleus is inserted into the pearl oyster. Of course, you have the “benefit” of being able to purchase pearls—either individually or as part of jewelry.