The most beautiful lagoon in French Polynesia 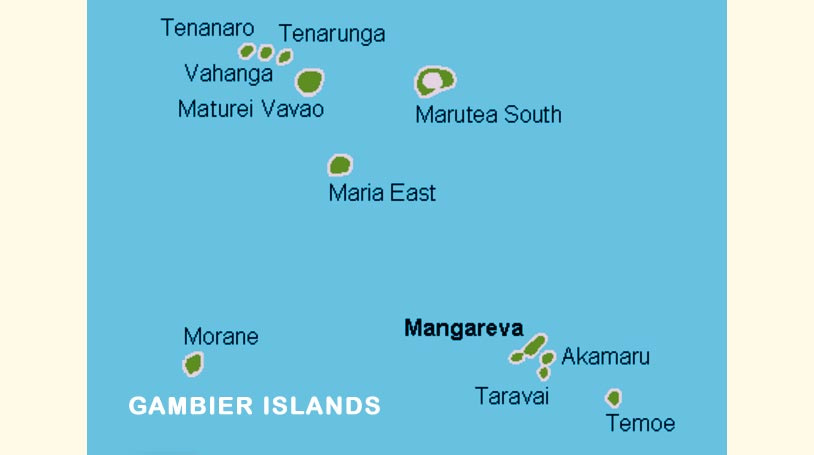 The remote Gambier Islands (also called Mangareva Islands) are located just over 1,000 miles (1,600 kilometers) southeast of Tahiti. Mangareva is said to have been lifted from the ocean floor by the demi-god Maui in Polynesian mythology.

Mangareva’s mountains rise like a great cathedral over the surrounding islands and the luminous lagoon. The island is the center of Catholicism in Polynesia, and the Mangareva people live a very traditional Polynesian lifestyle.

Mangareva is the largest island in the Gambier, and Rikitea, its main village is the archipelago’s main town. The island has a large lagoon with striking blue and green hues, and it is also well-known for its Tahitian black pearls, which are grown in the pristine waters surrounding the island.

The airport is located on Motu Totegegie, northeast of the lagoon, and is only accessible by the commune’s shuttle boat. Rikitea, the main village, is a tranquil place where flowering gardens adorn the houses that line a single street.

The Gambier Islands have been inhabited since the 12th century AD. The English pirate Edward Davis would have spotted the island of Mangareva much later, in 1687, but it was not until May 24, 1797, that the British navigator James Wilson discovered it.

Sailing to Tahiti with his crew and some LMS missionaries, he called the archipelago Gambier after the British admiral who supported the mission’s efforts. In addition, he named the highest point in the islands the Duff after his ship.

Frederick Beechey, the first European to set foot on an island, did so in 1826. The Mangarevans, who belonged to the Polynesian ethnic group and totaled around 5,000 people, were vegetarians who spoke a dialect called Mangarevian, according to the British commander.

Maputeoa, the monarch of the Gambiers, was living in Rikitea at the time. The population was dispersed over the four major islands. After a while, Beechey’s stories drew many commercial ships, making Rikitea an important resupply port and a hub for commerce with the indigenous for its high-quality mother-of-pearl, which was abundant in the wide lagoons.

The Congregation of the Sacred Hearts established the first Catholic mission in Polynesia in 1834. (Picpus). Honoré Laval, the mission’s superior, and Father François Caret multiplied the construction of religious buildings on all the surrounding islands (an enormous cathedral 48 meters long and 18 meters wide (Saint-Michel de Rikitea Cathedral), nine chapels, watchtowers, jails, and so on). The explorer Jules Dumont d’Urville, the discoverer of the Venus de Milo, visited the island aboard the Astrolabe in 1838 and complimented the evangelistic effort.

The islands were put under the French protectorate in 1844, but this was never approved by the French government. King Maputeoa died in 1857, and Honoré Laval, who had taken over as head of the mission, was regarded as the French government’s official envoy. Laval was compelled to leave the island on April 4, 1871, two months after the French legislative elections, after falling out with the French authorities over his desire to establish a “missionary theocracy.”

The population rapidly dwindled, and by 1887, there were only 463 people left. Slave ships arrived in search of slaves, while traders sought the native mother-of-pearl.

The Gambier Islands feature an enclosing coral reef that is broken up by only three passageways to the open sea, and Temoe atoll lies 45 kilometers (28 miles) southeast of the Mangareva Islands.

The volcanic islands are densely forested, with lush tropical vegetation covering them. Mt. Duff’s downwind side is arid grassland. Because of the poor fertility of the soil, the coral islands of the surrounding reef are devoid of species. Here, mostly coconut palms survive, which are economically employed for a minor copra output.

The coral islands’ flora and fauna are confined to birds, insects, and reptiles. The wildlife underwater is far more diverse. Divers will love the lagoon’s abundance of coral fish. If you want to dive deeper into flora and fauna, you can read our guide on Flora and fauna in the Islands of Tahiti.

The annual average temperature is 23 °C, with only insignificant differences between the months. The average annual rainfall is 1700 mm. The rainiest months are October and November. There are no distinct seasons, you find here more info about the best time to travel to the Tahitian islands.

What is the best way to get to the Gambier Islands?

Air Tahiti Nui operates non-stop and one-stop flights from Papeete to the Gambier Islands twice a week, for a total flight time of 4 hours and 25 minutes. The airport, like Bora Bora, is located on a motu. Each flight is met by a boat for the 30-minute journey across the lagoon to Rikitea.

Who is the owner of the Gambier Islands?

The group was annexed by the French in 1881 and is now part of the Tuamotu-Gambier administrative subdivision of French Polynesia. Subsistence agriculture and fishing provide the inhabitants with a means of subsistence.

Is Gambier Islands in Polynesia a country?

The Gambier Islands (French: Îles Gambier or Archipel des Gambier) is a French Polynesian archipelago located at the southeast end of the Tuamotu archipelago.