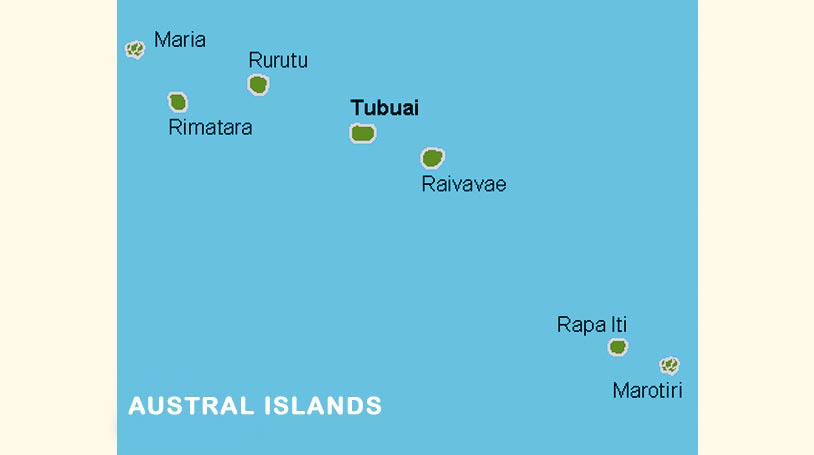 Rimatara, Rurutu, Tubuai, Raivavae, and Rapa are the seven islands that make up the archipelago, with five of them being inhabited. Four of these islands can be reached by plane. The Austral Islands have a population of only 6,800 people.

Here, where the white of the sandy beaches meets the intense blue of the lagoons, you will find an unspoiled, mysterious land. A trip to the Austral Islands is almost like traveling to the other side of the globe, and it provides a once-in-a-lifetime opportunity to reawaken the spirit of adventure that lies dormant within each of us.

The islands are known for their agriculture, with stunning landscapes ranging from rugged mountains to valleys and plateaus. Each island contains archaeological relics that bear witness to a well-organized pre-European community with a diverse cultural and religious heritage.

Legends abound in the Austral Islands’ cliffs and caves. They were once used as burial grounds but are now the best place to see humpback whales off the coast. Every August, whales migrate to the waters off the Austral Islands to give birth and stay until October.

The islands have a lot of charm, despite the fact that tourism isn’t very developed. However, one would not normally accept such a long journey to experience the same metropolitan hustle and bustle as one would at home. Finally, you have time to marvel at the scenery, smell the wonderful scents, interact with the locals, and simply enjoy life.

The prehistory of the Austral Islands is largely in the dark. However, because of their peripheral location in the Polynesian Triangle, it can be assumed that the Austral Islands were settled relatively late, probably by the Society Islands, possibly also by Mangareva or the Cook Islands.

After initial settlement in caves and rock overhangs near the coast, a stratified tribal society quickly developed in settlements near the beach. The settlement structure reflected the social order.

Because of increasing tribal warfare, the beach settlements were abandoned, probably in the 17th or 18th century. The inhabitants retreated to heavily fortified hilltop settlements inland.

The numerous wars and probably also the overexploitation of natural resources may have drastically reduced the population even before the arrival of the Europeans. Check out this detailed guide about French Polynesia’s history.

The youngest island, Marotiri, is nothing more than a jumble of rugged volcanic rocks with no protective coral reef. Maria, on the other hand, is the oldest atoll, with only four motus left after its volcanic central island sank into the sea many years ago.

The remaining islands are traditional atolls, with a central island and coral reef, as well as a ring of coral islands in various stages of development.

Because the Austral Islands are located north and south of the Tropic of Capricorn and thus in the tropical climate zone’s border area, the climate is tropical or subtropical-humid, but relatively cool when compared to the Polynesian islands further north. Raivavae, Rapa, and Marotiri have already entered the subtropical zone.

There isn’t much of a difference between the seasons. Temperatures vary only slightly from month to month, and rainfall is evenly distributed. Even on the more northerly islands, daytime temperatures rarely exceed 30 degrees Celsius. Nighttime temperatures on the archipelago’s more southerly islands can drop below 15 °C on rare occasions.

Where are the Austral Islands?

Discovered by Europeans in the 18th century, the Austral Islands are located 600 km south of the Polynesian capital. The archipelago is composed of seven islands, five of which are inhabited and four of which are only accessible by air.

When to go to the Austral Islands?

The months between May and November are the greatest for visiting the Austral Islands because they are less rainy. These are the coldest months of the year. There are no hurricanes in the area. Read also our guide about the best time to travel to Tahiti.

Where does the name Austral Islands come from?

The Austral Islands, named after their location, are a group of islands in French Polynesia’s southernmost region.

Are people living in the the Austral Islands?

Yes, working as artisans, fisherman, or farmers, the 6,600 residents live a laid-back life.

Which is the most popular Austral Island?

Rurutu is the most popular island with lovely coral caverns and lush greenery, as well as magnificent beaches with the cleanest white sand possible.