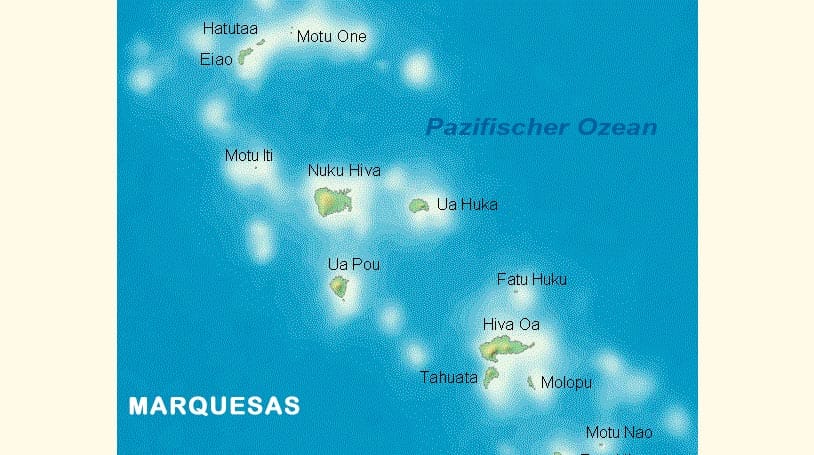 The Marquesas Islands archipelago consists of 12 mountainous islands (six of which are inhabited) without lagoons, which are known for their spectacular, sometimes rugged landscapes and traditional Polynesian inhabitants. The Marquesas’ original name was “Te Fenua Enata,” which means “the earth of men.”

The Marquesas is a retreat for many artists

It’s no surprise that many artists were drawn here: writers, painters, musicians, and adventurers alike felt at ease in the seclusion and were further inspired by the breathtaking scenery: Paul Gauguin, Herman Melville, Jack London, and Jacques Brel were all visitors to the Marquesas.

The Marquesas’ Art and Culture

The Marquesas are not only beautiful to look at, but they also have a lot to offer in terms of culture: There are many original Polynesian statues, memorials, marae, and houses here, all set against the breathtaking backdrop of these mysterious landscapes.

In addition, traditional Polynesian tattoo patterns are maintained and developed in the Marquesas, where the art of tattooing originated. The Marquesans are also skilled woodcarvers, whose work can be admired or purchased as souvenirs.

The Legend of the Marquesas

According to legend, the Marquesas were formed when the god Oatea, Father Sky, was asked by his wife Atanua, Mother Earth, to construct a home for their future children.

Tuaka in the middle of the ocean was the chosen place for the house. And the first thing that came into being was Ua Pou, “the two pillars”. Then he created Hiva Oa, the “roof beam” and Nuku Hiva, the “roof slats”, Fatu Hiva, “Nine rows of leaves cover the roof”, Motu Hane is the early bird that announces the day, and Tahuata the “first ray of sunshine”.

The Marquesas were inhabited as early as 340 BCE, according to legend. The southeastern islands were discovered in 1595 by Spanish explorer lvaro de Menda a de Neira, who named them after his patron, Viceroy of Peru, Marqu s de Mendoza. In 1774, James Cook paid a visit to Fatu Huku.

The northwestern group was discovered in 1791 by American sea captain Joseph Ingraham, who named them Washington Islands. Check also out French Polynesia’s history.

Missionaries arrived in Tahiti at the end of the 18th century, and protectorates were established by France in the 1840s. The entire group was annexed by the French in 1842 and is now part of French Polynesia’s administrative division, with headquarters in Hakapehi (Tai-o-hae) on Nuku Hiva.

Taioha’e, the capital of the Marquesas Islands, is located on the largest of the islands. Apart from the friendly inhabitants, it has a rich archaeological history full of legends and culture. The pristine volcanic peaks are lost in the Pacific Ocean’s blue and form the focal point of an incredible landscape.

The island is best known for its archaeological finds, including Takaii, Tahiti’s largest tiki statue, which stands nearly two and a half meters tall. The smiling figure stands among lush vegetation, but the area is also home to a number of other petroglyphs.

It is known as the Garden of the Marquesas because of its fertile, green land. On the island, you’ll find almost endless untouched nature: green, sprawling, and luminous, while roads and houses are scarcely visible. The rugged landscape is dotted with archaeological sites and ruins, nestled between sharp-edged ridges and black sand beaches.

A large ceremonial plaza has emerged in Taaoa, with stone structures and tiki statues, colorfully mixed with the pristine, primitive nature all around: giant banyan and breadfruit trees, as well as coconut palms and papaya trees.

Ua Pou, the third-largest island in the Marquesan archipelago, means “Two Pillars” in English. The moniker is more than apt considering the island’s silhouette is made up of 12 steeply rising basalt peaks that resemble church steeples.

The archipelago of the Marquesas looks like something out of a fairy tale: Nature has carved deep grooves and sharp edges into the landscape here, resulting in complex beauty that rises dramatically from the cobalt-blue sea.

The Cascades of colossal waterfalls cascade down vertical canyons. Sharp basalt columns protrude from the lush greenery. In a nutshell, the islands were formed by volcanic activity and are surrounded by a mystical aura.

Breadfruit, taro, yams, bananas, kava, and a variety of tropical fruits thrive in the fertile soils of the islands. Because of its proximity to the equator, the climate here has few seasonal variations.

The islands have a very little coastline and most of them rise directly from the sea. Individual sheltered bays with white or black sand or gravel, on the other hand, beckon you to swim.

The interior of the large islands is mostly mountainous and rugged, with deeply incised valleys where rivers occasionally flow into the sea with spectacular waterfalls. There is no coastal plain or strip of land. The only flat areas on the island are at the valley mouths, which were mostly settled and/or used for agriculture in the past.

In the bays, small beaches of black sand, gravel, or rolled pebbles have formed on occasion. Upwind, the islands’ south and east sides are nearly impenetrably covered in lush tropical vegetation, with rainforest reaching the highest peaks. The rain-shadowed northwest side (leeward side) is mostly arid, with sparse vegetation and desert-like characteristics in places.

The Marquesas are the peaks of a volcanic mountain range rising from the depths of the ocean. They, too, were formed by Pacific plate hotspots, much like Hawaii. Northern, central, and southern islands are divided into three groups, with ages increasing from southeast to northwest.

The rocks on Fatu Hiva Island, in the extreme southeast, are slightly older than one million years, while those on Hatutu, in the northwest, are over four million years old.

Although most islands lack a fringing reef, they are surrounded by small tributary islands or reef rocks. Mont Oave on Ua Pou has the highest elevation 4041 ft ((1,232 meters), while Mont Tekao on Nuku Hiva Island has the second-highest 4015 ft (1,224 meters).

The flora of the islands is very rich in species. A Smithsonian Institution research project has determined that of the 714 vascular plants found there, 337 are native species, nearly half of which are endemic. The fern population is one of the richest on Earth, with 27 families, 55 genera, and 117 species.

The original vegetation of the Marquesas originates mainly from the Indo-Asian region, which is related to the dispersal of plants in the Pacific from west to east. However, there are also some American and Australasian species.

Before human settlement, the islands were covered by dense rainforests. On the downwind and therefore low-rainfall side, savanna-like scrub and grasslands dominated.

Today, the vegetation of the islands can be divided into several altitudinal levels. In the lower areas, up to about 300 meters altitude, one finds tropical vegetation, which, however, has been decisively changed during the centuries of human settlement. These interventions were so extensive that hardly any indigenous plant communities can be found today. Many original species have become extinct. Overall the Anthropochore plant species dominate.

The fauna on land is otherwise limited to insects, snails, and lizards. Only farm animals such as horses, cattle, pigs, and chickens occur as large animals. The Marquesan dog is extinct. The rainforest is home to numerous rare bird species, for example, the Marquesan Pigeon, the Marquesan Fruit Dove, the Marquesan Kingfisher, the Marquesas Monarch, the Iphis Flycatcher, endemic to Ua Huka Island, and the Fatuhivamonarch, found only on Fatu Hiva.

The smaller, uninhabited islands have abundant birdlife with frigatebirds, terns, and other seabird species. Interested in more info about flora and fauna? Check French Polynesia’s flora and fauna here!

Why are the Marquesas Islands called the world’s most remote islands?

They are about 3,000 miles from the west coast of Mexico, the nearest continental landmass. The Marquesas are situated 850 miles northeast of Tahiti.

Where does the name Marquesas Islands come from?

A Spanish explorer Álvaro de Mendaña, stopped at Fatu Iva on July 21, 1595, and called the islands Los Marquesas after the wife of the Viceroy of Peru.

Did the artist Paul Gauguin live in the Marquesas?

Paul Gauguin lived in Atuona on the island of Hiva-Oa and was buried there following his death in 1903.

What is the capital of the Marquesas Islands?

The capital of Nuku Hiva, Taiohae, is the administrative center of the Marquesas Archipelago.

When to go to the Marquesas Islands?

The best time to visit the Marquesas Islands is between August and December. It is therefore possible, in August and September, to organize your trip to Polynesia by combining the Society Islands, the Tuamotu, and the Marquesas.