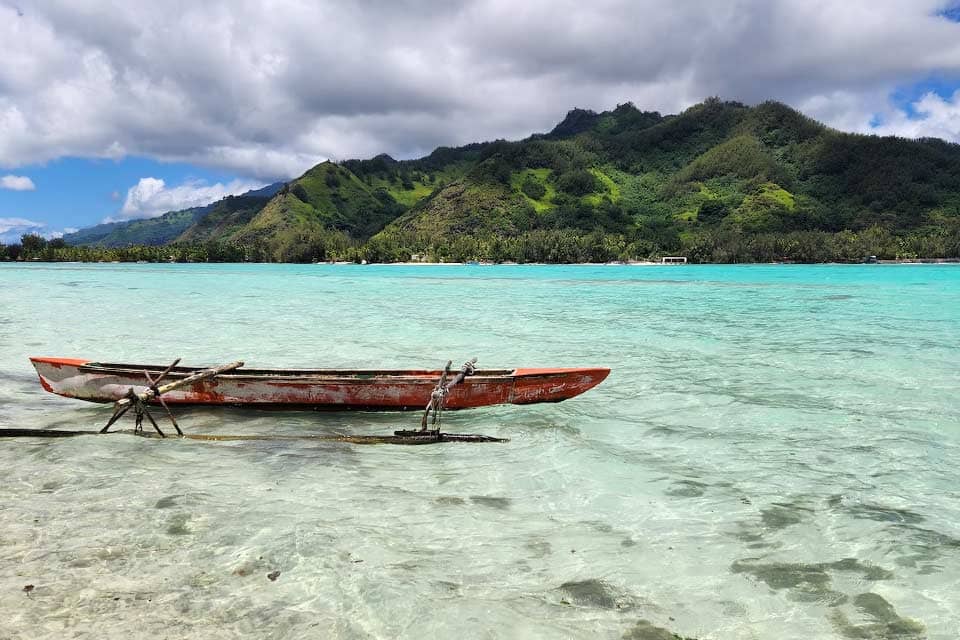 When many people think of French Polynesia, Tahiti and Bora Bora are frequently the first places that come to mind. While both are well worth a visit, tourists to the South Pacific might also consider spending time at Moorea, French Polynesia’s second-biggest island, located just 12 miles west of Tahiti.

Moorea, which is only 17 kilometers west of Tahiti, is known as Tahiti’s younger and quieter sister because of its lush greenery.

Moorea is part of the Society Islands. The volcanically formed island is situated on the windward side and hence belongs to the islands above the wind.

Moorea matches its close sister island, Tahiti, for sheer beauty, with its rugged volcanic peaks wrapped in lush vegetation descending sheer to the blue waters of the South Pacific.

When many people think of French Polynesia, Tahiti and Bora Bora are frequently the first places that come to mind. While both are well worth a visit, tourists to the South Pacific might also consider spending time at Moorea, French Polynesia’s second-biggest island, located just 12 miles west of Tahiti.

Moorea, which is only 17 kilometers west of Tahiti, is known as Tahiti’s younger and quieter sister because of its lush greenery.

Things to do in Moorea

What to Pack for your Moorea vacation?

How to get to Moorea

The most convenient way to get to Moorea from Tahiti is by ferry, which takes approximately 30 minutes and is very scenic. Aremiti and the somewhat speedier Terevau are the two ferry companies that run daily schedules, both arriving at the ferry terminal in Vaiare.

It is not necessary to book ahead of time during high season, and if you bring a car, scooter, or bicycle on the ferry.

Moorea has a small airport that mostly services flights to and from Tahiti. Moorea also has flights to Huahine, Raiatea, and Bora Bora, which are all part of the Society Islands.

Important note: Public transportation only serves the Aremiti Ferry.  The ferries are relatively large, although the voyage can be sometimes unpleasant when the water is choppy. Take a motion sickness tablet before leaving if you are prone to it.

The best option is to rent a car for your trip to Moorea if you want to visit the island in its entirety. Another practical way to navigate around Moorea is by renting a scooter.

The majority of Moorea’s roadways are flat, making cycling a viable option for transportation. On Moorea, hitchhiking is a highly prevalent activity.

The large island of Moorea lacks a tourist-friendly public transit system. The cost of public transportation is FCFP 150 for children and FCFP 300 for adults.

Every day at 5:00 am, the first departure leaves the Small Village commercial center towards Vaiare’s port (1 bus by the East coast and another one by the West). Depending on how many stops are made, the round-trip transfers take roughly 30 minutes. At 4:45 p.m., the final transport arrives.

The Top Things to do in Moorea

1. Swimming with dolphins and whales

A rare chance to snorkel with these calm marine mammals and go closer than ever before to them exists between July and November in the waters off the coast of Moorea. The majority of tours include marine biologists.

A town has been constructed on the island specifically for the use of tourists from across the globe. There, they demonstrate traditional dances, including fire dance, and give visitors a glimpse into traditional handicrafts. Read this guide, if you plan to buy souvenirs.

It’s even feasible to have dinner with the locals. The locals on the island offer a traditional Polynesian wedding at the Tiki Village for infatuated couples who want to wed there. Undoubtedly a memorable encounter.

The Marae Ahu-o-Mahine, Marae Titiroa, and Marae Afareaitu are found in the Opunohu Valley in the northern part of the island. These hallowed locations should undoubtedly be visited by anyone with an interest in Polynesian culture.

They are mystical locations with an abundance of “mana.” These locations are frequently visited as part of an organized off-road tour of the island.

The Lagoonarium, which is situated on the tiny Motu Ahi, is a fantastic excursion recommendation for families with kids. A vibrant aquarium is hiding here, just waiting to be found.

5. A quad bike tour across the island

A guided quad trip, in which you operate your own quad, is a fantastic way to travel to locations that are inaccessible to off-road vehicles. Because you are “in the middle of it instead of just being there,” a quad tour also delivers a unique experience.

Due to its fertile and diverse landscapes, Moorea is highly well-liked by hikers. There are many hiking trails that lead to ascents of the highest island mountains, albeit they are frequently heavily overgrown by the thick vegetation and difficult to see.

Always hike with a knowledgeable, experienced guide who is familiar with the terrain, and bring plenty of insect repellant. Read also our tips about what to pack for your vacation.

Moorea combines all of the natural elements of Polynesia: the terrain is rugged, with eight peaks dominating the landscape. Moorea has diverse and lush vegetation. Finally, Moorea has two enormous and deep bays, a clear and sublime lagoon, four motu (coral sand islands), and ten passes.

Moorea, which is located 18 kilometers from Tahiti, has magnificent mountainous landscapes. Its eight peaks, the highest of which, Mount Tohiea, rise 1207 meters above sea level, forming a line of jagged ridges that unfolds on a northwest, south, and northeast axis.

Except for the area behind Mount Rotui where the valleys of Paopao and Opunohu meet, which is partly covered by crops, the heart of Moorea is uninhabited because it is inaccessible.

Moorea is famous for its coral reefs, lush forests, hibiscus, and tropical tree plantations that grow bananas, pineapples, and papayas. Moorea’s marine biodiversity is extraordinary, with turtles, whales, and dolphins.

Moorea’s climate, like that of the rest of Polynesia, is relatively temperate due to the presence of trade winds and the ocean. Moorea has two seasons: the austral winter, which corresponds to the dry season from April to October, and the rainy season, which runs from November to March and features abundant and consistent rainfall accompanied by often violent winds.

Cyclones caused by the El Nio phenomenon are common in Moorea and Polynesia. Temperatures are at their “coldest” in July and August (between 24 and 28 degrees).

The most touristy areas of Moorea are located in the north and west of the island. It is possible to rent bicycles, scooters, or cars to get around. Another alternative is to rent a boat without a license.

What is the Geography of Moorea?

Moorea is a volcanic island located 11 miles northwest of Tahiti and measuring 37 miles in circumference. Moorea has been dubbed “the most beautiful spot on earth” by many. The craggy peaks and spires that give the island its distinct silhouette are one of the island’s most distinctive features.

The northern rim of the volcano, according to geologists, either fell into the sea or was swept away by a volcanic eruption millions of years ago, leaving the heart-shaped island we see today.

What is Moorea known for?

Moorea’s lush tropical landscapes, blue lagoons, and spectacular volcanic peaks make for breathtaking beauty. Belvedere Lookout offers one of the greatest views on Moorea. The panoramic views of Cook’s Bay and Opunohu Bay, as well as the distinctive mountain ranges, may be enjoyed from there.

How long to stay on Moorea?

Moorea is the type of spot where you’d like to stay forever. Moorea is a smaller, more laid-back counterpart of Tahiti, with equally varied views and sensations between sea and mountains, and is well worth a few days’ stay. Stay at least three days or better five days and rent a car for the duration of your trip.

Is there an airport in Moorea?

Moorea’s airport is served by Air Tahiti, which offers daily 15-minute flights from Faa’a airport. Moorea, Huahine, Raiatea, and Bora Bora are all served by Air Tahiti on a regular basis. Between Moorea and the beachfront in downtown Papeete, passenger ferries run up to eight times per day.

Moorea, like all of the islands outside of Tahiti, is a fairly safe area to visit. To stay safe, drive with extra caution at night, and before going to bed, lock your doors and close the windows once you leave the room.

Thefts have been reported at all hours of the night, even when people were asleep. Finally, keep an eye on things when you go swimming, and don’t leave anything appealing in your car.

What is the best time to visit Moorea Island?

Moorea is only 17 kilometers from Tahiti, hence the climates are very similar. However, days of heavy rain in Tahiti might be followed by sunny skies in Moorea.

The dry season (May – October), which is also the colder season, is the greatest time to visit, as it is in Tahiti. Sunny days are the norm, the majestic mountains are less cloudy, it’s much less humid, and there’s even a refreshing easterly breeze.