Tahiti is the Queen of French Polynesia 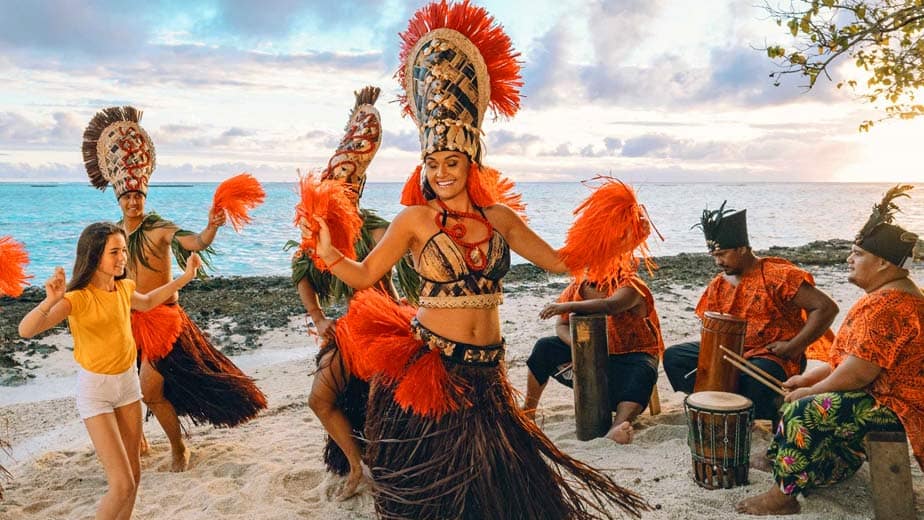 The volcanic island is part of French Polynesia and is the largest and most populous in the entire archipelago.

Tahiti is divided into two parts, which are connected:

Plan your Trip to Tahiti

Tahiti is accessible by Faa’a Airport, which is located about 7 kilometers northwest of the island’s capital, Papeete. Because Faa’a is French Polynesia’s only international airport, all other islands in the country, including Bora Bora, Tahaa, and Maupiti, may be reached via Tahiti.

Within the island, you can travel by rental car or the local bus system, which is well-developed and takes visitors to the island’s most important attractions.

Get a taste of the Tahitian cuisine

If you’re searching for where to eat in Tahiti, check out our restaurant listings, which include suggestions for dining outside of the hotels and resorts.

There are many restaurants to choose from throughout The Islands of Tahiti, and you can sample everything from mouth-watering Polynesian cuisine to United States comfort food – served with a Tahitian twist.

Looking for nightlife, Tahiti is the place to be

Tahiti is essentially merely a stopover for many vacationers on their way to another South Sea island because depending on the type of vacationer (diver, nature lover, honeymoon, wedding, etc.), other islands in the country are may be better suited for travelers looking for a more quiet location.

However, if you want a lot of variety and not just peace and quiet, and also want to go out in the evening, Tahiti is the place to be.

Discover the nightlife in Tahiti ›

Here, urban life coexists with a one-of-a-kind natural landscape, and dark beaches, as well as other cultural facilities, draw visitors. Unlike on many of the smaller South Sea islands, the tourist infrastructure is substantially established.

Also, the accommodations range from the absolute 5-star luxury hotel to the family-run tiny pension, leaving no demand unfulfilled.

Natural beaches in Tahiti are constructed of black volcanic basalt rock and may be found primarily along the west coast. Tahiti’s white, fine-grained South Sea beaches have primarily been built up by hotel operators for their customers.

However, whether on a white or black beach, Tahiti offers a conventional beach vacation as well as a variety of water activities.

Diving for beginners, surfing for pros

While diving experts are better placed on islands like Tikehau or Tahaa, which have more difficult dive sites, the diving locations off Tahiti are better suited for beginners and acquiring a certificate.

On the other hand, Surfers are well-versed in Tahiti because of the annual Billabong surfing tournament. This happens at Teahupoo, which has tunnels and large waves that expert surfers should only surf.

The locations at Papenoo, Taapuna, and Papara are more suitable for beginning surfers.

Birthplace of the Polynesian culture

Tahiti is regarded as the birthplace of Polynesian culture. Various museums on the island attest to its cultural heritage, making the largest island of French Polynesia the first port of call for culture-seekers. Aside from anthropological collections and art museums, there are ancient marae (places of worship) and burial sites to be discovered all across the island.

Driving inland from the populous shore reveals that Tahiti is an island of contrasts. In the interior of Tahiti Nui, two massive mountains stand side by side, separated by wide valleys and enormous waterfalls.

The Tahiti-Faa’a Airport, located 5 kilometers from Papeete in Tahiti, is French Polynesia’s busiest airport. The building, which spans 10,300 square meters, features two terminals, one for domestic flights and the other for international destinations, as well as a VIP lounge and Duty-Free shop.

Tahiti-Faa’a Airport offers two drop-off stations in front of each terminal, as well as 600 paid parking spaces divided into three zones. A bank, a travel agency, a baggage hold service, an internet zone, and many restaurants are also available at Tahiti-Faa’a Airport.

Passengers flying from Faa’a International Airport to Bora Bora, Moorea, and other inter-island locations will do so.

What is the Geography of Tahiti?

The heart of the island is densely forested with soft ferns, with waterfalls flowing into natural rivers and streams to produce stunning ravines, as well as flat coastal areas with taro farms and tropical plants.

Tahiti is made up of two main island groups: Tahiti-Nui (large Tahiti) and Tahiti-Iti (little Tahiti), which are united by the Plateau of Taravao, a narrow isthmus.

Tahiti Iti, the smaller section, is quite rural, with a lot of lush, natural beauty and small communities. Read more about French Polynesia geography.

What is Tahiti best known for?

Papenoo Valley, with lush jungles and an infinite array of waterfalls, is located in the middle of the island.

What country is Tahiti a part of?

French Polynesia, which includes Tahiti, is a large French territory in the Pacific Ocean made up of 118 volcanic and coral islands and atolls. This vast region of the Pacific, the size of Western Europe, remains strategically important for France.

In Tahiti, what language do people speak?

The official language of the Tahiti Islands is French. Tahitian is generally spoken at home by islanders, but French is widely spoken in schools and businesses.

However, English is widely spoken at restaurants, resorts, and other tourist places after you arrive on the islands. It is also regarded as a third language.

Bora Bora or Tahiti: which is better?

Tahiti is a more developed island, and while its beaches aren’t as well-known as those in Bora Bora, it has fantastic shopping, nightlife, cultural events, and outdoor activities.

When you think about paradise, the image that comes to mind is Bora Bora. It’s a smaller, more exclusive island.

Is Tahiti a safe place to visit?

Tourists can feel protected in Tahiti, but pickpockets can occur in the capital city Papeete. Most visitors quickly learn that Tahiti is a friendly and inviting place for foreigners. Read more at safety tips.

What is the ideal length of stay in Tahiti?

We usually recommend that clients stay at least three nights on each island on their itinerary. Travelers who stay for less than three nights are likely to feel pressured. After all, you’re going there to rest at the very least.

How is the weather in Thaiti?

The weather on the island is pleasant for most of the year, and there is no season that is inconvenient for a visit or holiday there. The weather is tropical, but the trade winds keep the temperatures cool and mild.

The temperature of the sea is 27-29 degrees Celsius. The months of November to April are the hottest, most humid, and wettest, especially January and February, whereas the months of May to October have little rain and are less humid, but the winds are stronger. Read more about the best time to travel.