A tattoo was an important part of ancient Tahitian culture 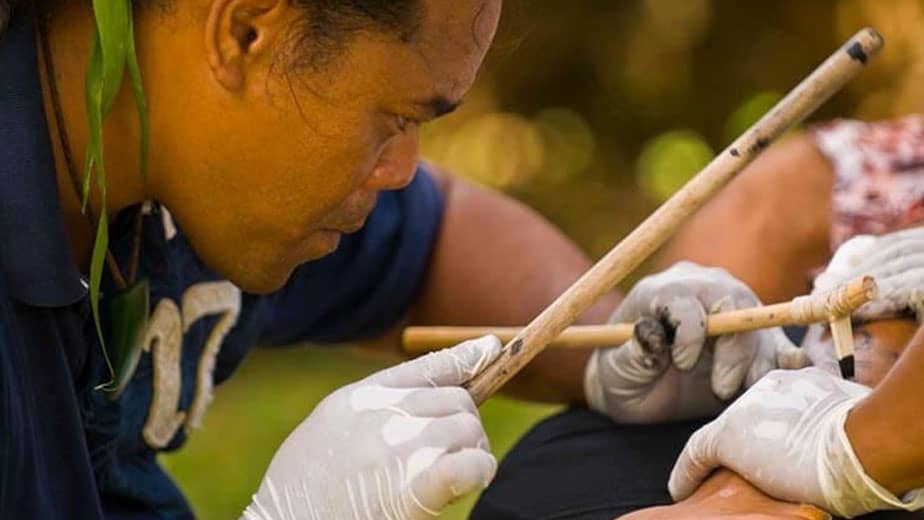 What does the tattoo mean in Tahitian?

Tattoos had their own code and expressed the social status of a person. They announced passed initiation exams, achievements, or roles within the tribe.

Today’s tattoos are more for expressing personality and proudly announcing belonging to a clan or an island, such as the Marquesas Islands or Bora Bora.

A traditional tattoo is your own personal memento and a souvenir of a special kind.

Each group of islands had its own style: the Tuamotus, for example, used rather simple, geometric figures; the patterns of the Marquesas, on the other hand, were the most complex and elaborate figures, which are also the basis for today’s tattoos.

The History of Tahitian Tattoos

The not-quite painless body art probably had its origin over 1500 years ago on the nearby Marquesas Islands and spilled over from there to the rest of Polynesia.

In the 18th century, the British navigator James Cook and explorer Joseph Banks brought tattoos back to Europe from their Pacific voyages – on their own bodies, of course. Over the years, the Tahitian term “te tatau” became the English word tattoo.

In the traditional tatau method, a tatau comb made of bone or tusks was used to rhythmically beat wounds into the skin.

A paste of soot, burnt seed kernels, and coconut oil was then rubbed into the wounds, causing permanent discoloration of the skin.

The English captain and circumnavigator James Cook (1728 to 1779) discovered Tahiti on April 11, 1769, and explored the South Sea on three voyages.

When Cook returned home to England from his second voyage in 1774, the tattooed Prince Omai from Tahiti also disembarked.

Omai, who had come to England at his own request, quickly became a living sensation in London’s aristocratic houses because of his rich body decorations.

Press reports about the “wild Indian from the South Seas” quickly spread throughout Europe, including Berlin.

Omai was readily admired at receptions, scientific circles, and fairs – and fired the imagination of writers.

Novels and plays were written. In France, the “Narrations d’Omai” appeared in four extensive volumes. The Theatre Royal in London’s Covent Garden presented the pantomime play: “Omai, or, a trip around the world”. August von Kotzebue adapted the material for the German theater.

The discoverers of the time are also to blame for the fact that this art was almost lost in Polynesia for centuries: with Cook, the Christian missionaries found their way to the islands, and they made sure that the pagan body art of the “savages” was banned.

It was not until the 1960s that French Polynesia saw a renaissance of tattooing and a return to the old customs and traditions of the ancestors.

What story do Tattoos tell?

The classical motifs have remained almost unchanged. Only technology has advanced. Combs made of bone or mother-of-pearl are no longer used for stitching. Sterile needles and electric machines are also part of the basic equipment of every tattoo artist.

Tahitian tattoos are anything but pure body jewelry, they tell stories. From the wedding of the grandparents to the death of the brother to the birth of one’s own children: entire family chronicles are immortalized on the bodies of the natives, albeit abstractly.

In addition, many tattoos also have a spiritual meaning and take on the function of a talisman. Manta rays, sharks, turtles – most animal motifs are the guardian spirits of one’s own clan.

Tattoos also served as an initiation ritual to mark the end of childhood and the transition into adulthood. Furthermore, the body was more and more covered with tattoos in the various further phases of life to announce the current state and achievements in life.

Legend has it that the Ma’ohi got tattoos to please the deity Ta’aroa. The latter’s sons were the first to adorn themselves with tattoos to impress those around them.

They told the other men about it and from then on tattoos were used frequently. Ta’aroa’s two sons, Mata Mata Arahu and Tu Ra’i Po’, thus became the patron saint of tattoo art.

Nowadays, tattoos are used more for beauty and aesthetics. However, some tattoo artists have specialized in reconstructing and reviving the original motifs with their meaning.

How important tattoos are for the Polynesian culture is also shown by the fact that every year a tattoo festival takes place in Tahiti (usually in November), where for a few days everything revolves around this art.

Tattoo artists enjoy great prestige in Polynesia. They are respected as true artists. The currently most famous representative of this guild works on the island of Bora Bora.

Thanks to his skills, Marama is considered a living legend, and customers even fly in from Tahiti, a good hour away, to have their bodies embellished by him.

Tourists also queue up, but not everyone can get an appointment with Marama. In addition, communication with the master is quite difficult for many vacationers. Marama speaks only a little English and is difficult to contact, may try Mooreatattoo.com

What do the symbols on Polynesian tattoos mean?

Because there was no writing in Polynesian culture historically, the Polynesians used tattoo art with distinctive signs to express their identity and personality. Tattoos would denote status in a hierarchical society, as well as sexual maturity, ancestry, and social standing.

How painful is it to get a Polynesian tattoo?

In the old days, these tattoos not only took a long time to complete, but they were also extremely painful. Depending on which part of the body is involved, the procedure could be agonizing. It took a lot of courage and endurance, as well as rest in between sessions.

Is it acceptable for a white person to have a Polynesian tattoo?

As a white person, you can get a Polynesian tattoo.

Next: Fauna and Flora in French Polynesia