The Society Islands are French Polynesia’s most populous archipelago. 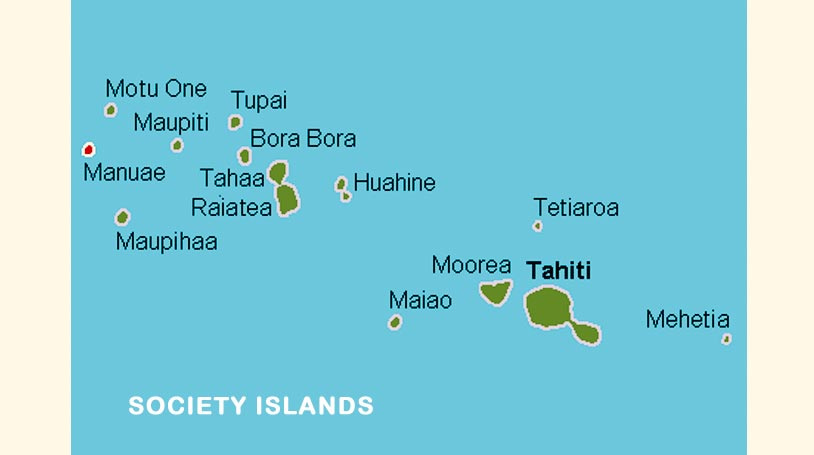 The Society Islands are the most popular South Sea archipelago and tourist destinations in the country because they are closest to the international airport in Papeete.

The majority of trips to French Polynesia end here. Tahiti, Moorea, Bora Bora, Raiatea, Taha’a, and Huahine offer a delectable mix of luxury and natural splendor. Come here to unwind and disconnect from the rest of the world.

The English navigator Samuel Wallis visited the Society Islands in 1767 and claimed them for Great Britain. However, a year later, Louis Antoine de Bougainville, a French navigator, established a French claim.

Captain Cook named this island chain in honor of the Royal Society of London, which sponsored his first expedition here in 1769. It is both the demographic and economic heart of the country, with 87 percent of the population (243.290 residents in 2017) and more than 90 percent of the BIP generated.

The societal islands are divided into two groups: the Windward Islands and the Southern Islands called the Leeward Islands. You find more about French Polynesia’s history here.

The majority of the population of Französisch Polynesia lives on the Society Islands. With a total of 9 islands and 5 islets, the archipelago is divided into two groups:

The group consists of four islands: Tahiti, Moorea, Mehetia, Maiao, and the atoll Tetiaroa with a combined population of 207,330 people (mostly on Tahiti and Moorea) accounting for 34% of French Polynesia’s total population.

The capital, Papeete, as well as Faa’a International Airport, the main port, numerous administrative facilities, the university, hospital, museums, industrial areas, and most businesses, are all located on the island of Tahiti (which makes up a quarter of French Polynesia’s land area). International tourists visiting Tahiti and her islands arrive in Papeete as well.

Tahiti is the proud queen above the sea, with a mountainous interior, picturesque gorges, crystal clear rivers, high waterfalls, and Papeete as its bustling capital.

Tahiti is home to friendly people who proudly display their culture through dances and music. There are also black sand beaches, world-famous surf spots, lush green mountain scenery, and historic sights and markets.

Moorea is known as “nature’s playground” because the island rises majestically from the sea, with steep peaks, picturesque waterfalls, and hibiscus gardens. Canoeing, standup paddling, kiteboarding, water skiing, and surfing are just a few of the fun activities available on the island. Moorea is also a diver’s dream come true.

Humpback whales, Stingrays, sharks, sea turtles, and the Moorea Dolphin Center will awe you as you learn about the diverse ecosystem of the underwater world.

Excursions such as hiking, quad biking, horseback riding, and four-wheel drive tours are also available on a daily basis! The island promises to satisfy all of your senses.

The island consists of 12 small overgrown reef islands and a sandbar grouped around a lagoon. Tetiaroa is located about 40 km north of Tahiti and covers an area of 5.1 km². The reef islands are uninhabited.

The island is a non-inhabited Vukan island with an area of about 2.3 km². The distance to Tahiti in the west is about 110 km.
The highest mountain on the island is the 435 m high Mont Fareura

The island is an atoll, the main island being a volcanic island. Maiao covers an area of 8.3 km², with about 350 inhabitants. The main town is Taora O Mere.

Bora Bora, Huahine, Raiatea, Taha’a, Tupai, and Maupiti are among the nine islands (with a population of about 35,000) in the western part of the Society Islands, as well as three atolls: Mopelia, Scilly, and Bellinghausen.

The Leeward Islands are named after their position in relation to the trade winds. They cover a total area of 430 square kilometers. They are older geologically than the Windward Islands.

Huge reefs surround the islands, which will gradually turn into atolls over the next million years.

Tourists are drawn to the motu (small islands) perched on the reefs and the vibrant colors of the lagoons. The Taputapuatea Marae, a sacred site on Raiatea, has been designated as a UNESCO World Heritage Site.

Bora Bora is a small island off the coast of Polynesia. Who hasn’t fantasized about spending their vacation here? We guarantee that the island and its resorts are just as lovely as they appear in the photos. Love at first sight, pure romance, blue color plays, blooming valleys.

Take a stroll along white sand beaches and go snorkeling with tropical fish and manta rays. Make it a point to spend the night in your own private water bungalow. Bora Bora is one of the world’s most beautiful islands. Around the emerald green shimmering lagoon, coconut palms line the white sand beach. Make sure to plan your trip with a relaxing finale here – you’ll love every minute.

Huahine captivates you from the moment you arrive. A well-kept secret just 40 minutes by plane from Tahiti hides lush forests, pristine scenery, and quaint villages reminiscent of Tahiti. The two islands are surrounded by a deep, crystal-clear lagoon.

The beautiful bays and white beaches are breathtaking, isolated, and largely unaffected by modern civilization. Here, ancient Polynesia’s slow pace still reigns supreme. The few residents of the island’s eight small villages greet each visitor with the utmost friendliness. It’s no surprise that the fertile soil produces a bumper crop of vanilla, melons, and bananas for the local farmers.

Raiatea is the spiritual and historical center of ancient Polynesia. Many archaeological treasures await you on the island. The locals’ far-reaching culture and stories will captivate you. Many New Zealand, Hawaii, and Cook Islands communities still gather here to find a spiritual home.

Raiatea makes every sailor’s heart skip a beat; unspoiled nature and idyllic lagoons await you. The flora and fauna, particularly the unique tiaré ‘apetahi, Raiatea’s landmark, are exciting for scientists and nature lovers. The flower only blooms at dusk.

Taha’a slows down. This peaceful island transports you to Tahiti’s traditional way of life. The rolling hills surrounded by small motu with white sand beaches add to the simple beauty of the flower-strewn island.

The vanilla scent pervades the gentle breeze that blows over the hills and down to the sea from the many vanilla farms. Long before the islands appear on the horizon, the mild aroma can be detected in the breeze as you approach them over the sea.

Maupiti There are places on Tahiti’s islands where you can indulge in renowned five-star resorts, and then there are places where you can surrender to life’s ebb and flow. On this island, live like a local. If you’re looking for sand, sea, sun, time, or tide, the Maupitians will embrace and welcome you like a family member.

What if the world’s most romantic atoll was also heart-shaped and only a few miles from Bora Bora? Tupai, a small island 9.9 miles (16 kilometers) north of Bora-Bora, is shaped like a heart from the air. It has a double lagoon and a motu surrounded by coconut palms. Many birds call the island home, and sea turtles come to lay their eggs on the beach starting in November.

Manuae is an atoll consisting of four islands. The atoll covers a land area of 4 km², with around 20 inhabitants. The island should not be confused with an island of the same name, which belongs to the Cook Islands archipelago.

Maupihaa is an atoll consisting of four islands. Less than 10 people live on the atoll.

Motu One is an atoll consisting of six islands. The main island is Motu One, which has the same name. The atoll is uninhabited

Why are they known as the Leeward Islands?

The term “Leeward Islands” is a translation of the archipelago’s Tahitian name: “te mau fenua raro mata’i,” which means “the islands under the wind.”

What is the location of the Leeward Islands?

The Leeward Islands are located 200 km northwest of Tahiti and Moorea, form with the latter the Society Archipelago. Bora Bora, Huahine, Maupiti, Raiatea, and Tahaa are among the five high islands in the Leeward Islands archipelago, as are four poorly populated atolls.

Who discovered the Society Islands?

Captain Samuel Wallis claimed the Society Islands for Britain in 1767, and Louis-Antoine de Bougainville claimed them for France the following year. In 1769, they were visited by British Captain James Cook as part of a Royal Society scientific expedition, which is where the name originated.

What is the age of the Society Islands?

The island developed as a volcano 1.5 to 2.5 million years ago as a result of the Society hotspot in the mantle beneath the oceanic plate that formed the Society Archipelago as a whole.

Is Bora-Bora a Society Islands?

Yes, Bora-Bora is a volcanic island in the Leeward Islands in French Polynesia’s Society Islands. It is located in the center South Pacific Ocean, approximately 165 miles (265 kilometers) northwest of Tahiti. If you are interested in geography, find out more about French Polynesia’s geography here.