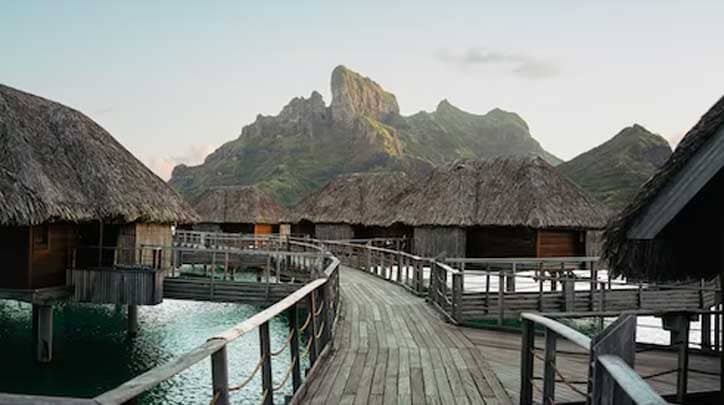 The island’s center is home to an extinct volcano with two peaks, one of which is Mount Otemanu. This volcanic remnant, which rises about 2,400 feet above the lagoon, allows for a magnificent photo opportunity or an exhilarating excursion.

In fact, many claims that visiting the summit of this spectacular mountain is a necessity for a trip to Bora Bora. And don’t worry, hiking isn’t your only choice; you can also explore Mount Otemanu by boat, helicopter, off-road, or simply just taking a few impromptu photos standing on the beach.

The mountain’s surreal splendor, visible from almost anywhere on the island, astounds many visitors. Additionally, previous visitors who took the off-road tour gave them good marks and stated they were able to get to the mountain’s peak fast, giving them more time to enjoy the breathtaking views and capture some amazing pictures. Consider ascending Mount Pahia, the lower of the two peaks.

The journey to Otemanu is a little less strenuous than the one to Mont Pahia despite the fact that Otemanu is the higher of the two mountains. This is also because the mountain cannot be scaled all the way to the top. The Sacred Cave of Anau, whose enormous black entrance can already be seen from the coast, is the hike’s only destination.

The mountain had never been scaled prior to the creation of the trail in 2006. Overall, the excursion lasts roughly 5 hours, of which 2.5 hours are spent ascending and 2.5 hours descending. You need to be in good physical shape and have prior hiking expertise to take on the trek. Beginners should avoid hiking Otemanu.

The hike begins on the bay of Vairau and proceeds over a strenuous path into an area of densely vegetated jungle. On the first plateau, you can immediately guess the breathtaking vista that awaits hikers a little higher up.

But before, there’s a second part that winds across a wide open area and past enormous monoliths. A rope must be used to climb the final stretch prior to the cave. When at the summit, hikers are astounded by the enormous cave opening on one side and the breathtaking view of Tupai, the “heart island”, and the nearby islands of Tahaa and Raiatea on the other.

Why is it hard to climb Mount Otemanu’s peak?

Only the base may be reached by hiking, and even then, a local guide is recommended. The weak volcanic rock, which cannot withstand the weight of a typical person, makes it impossible to reach the peak, although this does not stop ardent climbers from making an effort. The locals claim that nobody has yet succeeded in doing it.

Massive round stone walls of a temple, which is supposed to shelter the king’s ghost, can be seen on the southern side. if you like to dive deeper into historic sites, read about  Marae Marotetini and Marae Fare Opu.

Can I reserve a guide for the climb up Mount Otemanu?

Most tour companies provide Mount Otemanu excursion packages and start at Vaitape. Transportation to and from your accommodation is frequently included in the package price by most tour companies.