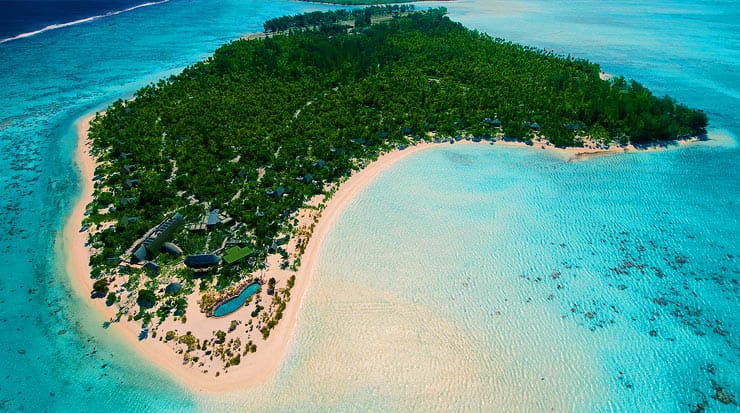 Tetiaroa is revered in Polynesian mythology and history. For centuries, Tahitian royalty used it as their own hideaway. There are still standing marae (historic temples) that the early Polynesians erected on the atoll.

Polynesians will always hold a particular place in their hearts for this land because of its illustrious past and ethereal beauty.

In the center of French Polynesia, 30 miles to the northeast of Tahiti, is where you’ll find the Tetiaroa island atoll. The resort is situated on the 78-hectare motu of Onetahi, which is perfectly situated on the edge of Tetiaroa’s deep, blue lagoon.

Best Time To Travel to Tetiaroa

When Marlon Brando initially visited Tetiaroa for the first time to begin filming Mutiny on the Bounty, he was awestruck by the island’s exceptional beauty and the feeling that it brought him closer to paradise.

He was enthralled by the Polynesian culture and the leading lady Tarita, his true love, and he vowed to find a method to acquire this slice of paradise. In 1967, he was successful in accomplishing this. He eventually found a place to call home and settled down there in this natural splendor.

Brando was driven to find a method for Tetiaroa to serve as a hub for research and education, as well as a model for sustainability because he was enthusiastic about maintaining the region’s natural beauty, biodiversity, and cultural richness. He firmly believed that the world could benefit from this tiny atoll

For thousands of years, the stars have guided travelers to French Polynesia. Around 4,000 years ago, mankind first traveled to Polynesia by following guiding stars. They departed Southeast Asia and arrived at the Society Islands around 1100 AD. with their outrigger canoes.

Later, came the Europeans. The most well-known of them all was Captain James Cook, who made his debut in Polynesia in 1769.

In “Mutiny on the Bounty,” which tells the story of his men overthrowing him, Lieutenant Bligh, who served as his second in command on his third expedition, later returned on the Bounty as Captain Bligh to gather the nearby breadfruit plant to feed the vast British Empire.

Tetiaroa continued to be a sacred island by the locals despite these breaks caused by European explorers. On Tetiaroa, they built a site of worship, ceremony, and tapu (taboo), where the gods and ancestors were rumored to visit the marae (temples).

High chiefs from Tahiti also preferred to flee to Tetiaroa. The princesses (arii vahine) withdrew to the lush shade of the coconut trees to be nurtured while the young chiefs (Tahitian ma’ohi ) engaged in archery competitions and honed their war skills. These were the high chiefs of Tahiti’s holy pleasure grounds.

The reef that surrounds Tetiaroa and the enormous, magnificent corals in the inner and outer lagoons are ideal habitats for marine life. Around the atoll, at least 167 different fish species have been spotted, including blacktip sharks, bonefish, and colorful parrotfish.

During their yearly migrations, whales frequently stop at Tetiaroa, while dolphins frequently frolic off the reef. Large sea turtles come ashore during the nesting season to bury their eggs.

Beautiful tropical birds can be found all across Tetiaroa, but Tahuna Iti, often known as “Bird Island,” is one of the motus. There are a few birds that live on land, but the vast majority are seabirds, such as the stately big frigate and the noddy.

An outflow of birds from Tahiti joins the “permanent residents” every evening as they fly the short distance over the water to rest in the security of the thick forest, away from predators.

There are 38 native plants on the twelve motus, six of which are extremely rare. These plants range in size from tiny blossoms to the spectacular Puatea, Pisonia grandis, which may reach heights of up to 65 feet.

What kind of island is Tetiaroa?

Tetiaroa Island is a component of the Society Islands archipelago, one of many island groups of French Polynesia, which is located in the southern Pacific Ocean. An atoll made up of thirteen tiny islets is called Tetiaroa (or motus).

Where is the island Tetiaroa?

French Polynesia’s Society Islands include Tetiaroa. This tiny, remote atoll, which is thought to be an extension of the Arue commune, is situated 50 kilometers (40 miles) north of Tahiti.

Who is the island’s owner?

An atoll in the Windward group of the Society Islands in French Polynesia, a French overseas territory in the Pacific Ocean, is called Tetiaroa. The islets, which were formerly a popular vacation destination for the Tahitian aristocracy, are leased for 99 years by Marlon Brando.